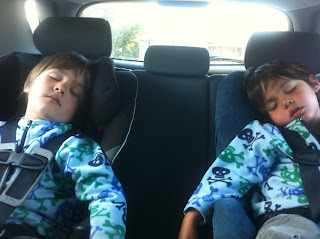 We moved to a new hotel last night and slept together (all four of us)
in a King bed - which meant Jon and I didn't get much sleep since the
boys are such active sleepers.

We then woke up early this morning and hustled to get to the airport.
Jon dropped us off at curb side so I could check in at curb side,
without having to haul all of our crap and two boys by myself for very
long (Jon is staying in SD this week for a work conference).

The plan worked out great, esp. since the boys were still tired and a
bit goofy all the way until we sat in our seats on the plane. So I was
relieved I didn't have to deal with the bags and car seats for very
long.

Still, even with the goofiness and excitement that the boys had (which
made them a handful) they weren't too bad. Which means I survived our
first flight with both boys, all by myself! It was also great practice
for (hopefully) a few more trips later this year. :)
Posted by Mama Bree at 6:31 PM