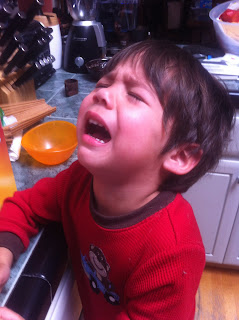 I don't often post meltdown/crying pics, because usually I'm too busy
consoling my kids to take a picture. But this morning was just too
much (and I couldn't resist - ha!). I now have a whole series of this
and frankly, I should've added audio/video just to share with you how
pathetic (and loud) Callum was here.

Anyway, I got a little jar of jelly beans from Amanda's baby shower
yesterday which I brought home for the boys to enjoy. Since they don't
normally eat jelly beans (it's not something I keep in the house!) the
newness and uniqueness of this treat was really special.

Which means, the jar has now been promoted to Callum's "great job!"
treats as he's potty training this week. But, having the sweet tooth
that he does (like his father!), he isn't satisfied with just one or
two that mean ol' mom gives him as a reward.

A full day of activities! 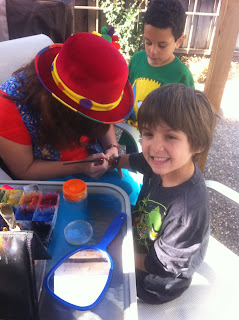 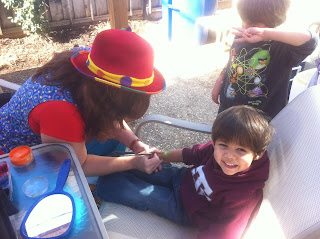 On our agenda for the day:

1) Braylen's 2nd Birthday Party (where the boys were thrilled to get
angry birds painted on their arms)
2) Check in on our friends - Phil broke his neck playing rugby and
needed to have surgery this week (he's doing well now)
3) Baby shower for my friend Amanda. Woohoo!
4) Date night for me and Jon. It's been awhile! :)

(And tomorrow I'm going out with Catherine to celebrate her birthday!)
Posted by Mama Bree at 12:32 PM No comments: 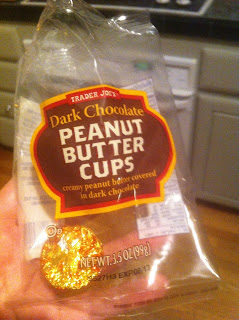 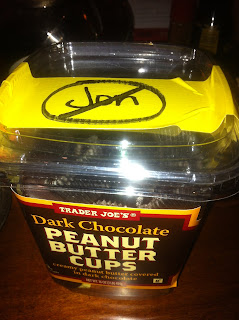 So around the holiday time, Kim got me a small bag of dark chocolate
peanut butter cups because she knows I'm a dark chocolate fan.

The first picture is what I texted her when I found my bag of
chocolates, opened and almost gone, and I hadn't even had one
chocolate yet!

The second picture is what Kim just got me today. With a subtle
message to my husband to keep his grubby paws off this time. ;-)
Posted by Mama Bree at 7:04 PM 1 comment: 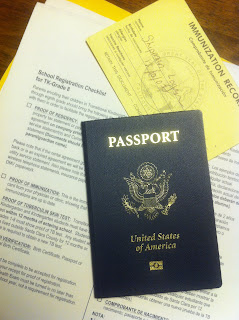 Just finished filing Logan's school registration paperwork. Since
we're requesting a different school from our neighborhood school, we
won't know until the end of March, whether he's in or not.
Posted by Mama Bree at 1:59 PM No comments: 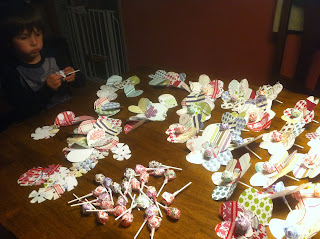 Mommy, Callum and I are in love.
Posted by Mama Bree at 8:11 PM No comments: 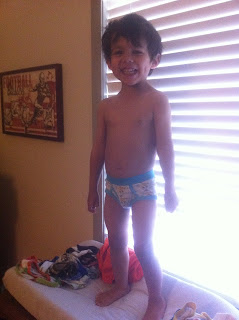 Potty training has been going well these last few weeks. Callum
generally has a dry diaper and pees/poops in the toilet at school.
He's a little less consistent with us at home, but it's more because
the teachers are diligent about checking his diaper and putting him on
the toilet frequently and we generally forget to ask until it's too
late. ;-)

That said, he's not bad at home and usually tells us when he wants to
go on the potty, which we totally encourage (even at bedtime when he's
stalling).

The teachers have asked us to bring pull ups to school and/or move him
to underwear because he's been so consistent and because he tries to
pull down his own pants/diaper himself. The only reason I haven't done
this yet is because I still have a ton of diapers I don't want to
waste! :)

All that said, today Callum proactively asked me if he could wear
underwear and said he did not want to wear a diaper. Not eager to
clean up after a bunch of accidents, but also not going to discourage
the little guy, I pulled out a handful of underwear for him to choose
from, which he was DEEE-LIGHTED about.

We talked awhile about how he needed to let me know when he needs to
pee on the potty since otherwise his underwear would get wet (he hates
a wet diaper so I knew wet underwear would freak him out). He listened
but I don't know how much he understands the implications.

And, he's now had one small accident which he didn't like at all but
when I offered either another pair of underwear or a diaper, he still
wanted to stick with the underwear.

So, maybe it'll just take a few misses before it sticks! We'll see....
Posted by Mama Bree at 1:51 PM No comments: 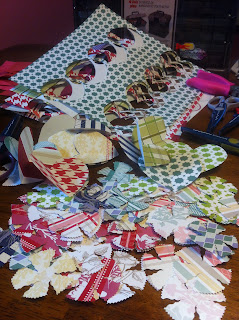 These DIY Valentine's always sound like a great idea...until I
remember we have to make ~60 of them.
Posted by Mama Bree at 10:27 AM No comments: 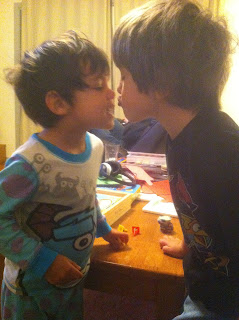 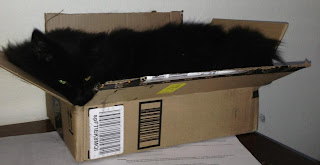 Jon posted this on Facebook but I love it so I stole it. :)
Posted by Mama Bree at 8:44 PM No comments: 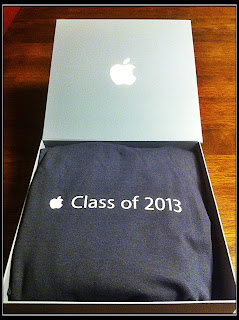 I'll be drinking from the firehose for awhile. But it sure tastes sweet!

Very happy with my move to Apple. Looking forward to doing big things here.
Posted by Mama Bree at 7:49 PM No comments:

To Callum (after teaching him how to cough into his arm):

When you get bigger, you'll learn more things.
Posted by Mama Bree at 7:26 PM No comments: 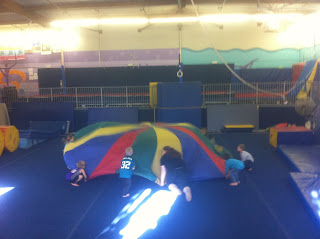 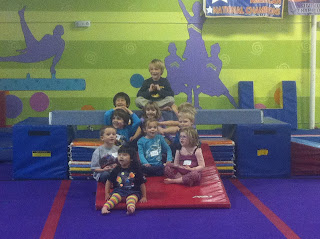 Logan's friend Isaac turned 6 last month but they waited until today
(post-holiday madness) to celebrate with friends. The party was at a
very serious gym (training older kids competitively), and I really
liked how they ran thru the exercises for the party. If it weren't so
far away, I'd consider putting the boys in a class or two!

It was our first experience of a "drop off party" where Isaac's mom
said I could leave Logan and come back in a couple of hours if I
wanted. Logan was actually a little shy and nervous when we first got
there because there were some kids he didn't know (Isaac started
kindergarten this year so he's no longer at the same school as Logan),
so I decided I'd better stick around. I don't think he's yet at the
age for me to just drop off, feels a little weird, but other parents
seemed to feel the same so I wasn't the only over protective parent
sticking around. ;-)

No surprise, Logan warmed up to the other kids pretty quickly and
ended up having a great time - even commenting to me afterward how fun
the party was. :)
Posted by Mama Bree at 6:56 PM No comments: 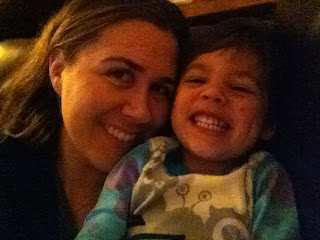 Yesterday Callum stayed home sick from a fever. Jon stayed with him
because it was my first week on the new job and I didn't want to make
any bad impressions. ;-)

Apparently he asked for me all day long, and would run to the door
yelling "Mommy's home!" anytime he heard any noises. So, when I
(actually) did get home, he was thrilled to see me. We snuggled on the
couch together until bedtime. :)
Posted by Mama Bree at 6:47 PM No comments:

Out with the old, and in with the new 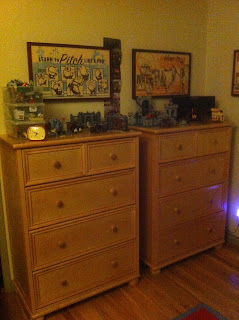 Just picked up the boys' new chest of drawers this evening. They'll
replace my (first) old dresser and the changing table (which we've
also been doubling as spillover from the dresser).

As sad as I am to get rid of my old dresser (and the crib/changing
table), this will give us a ton more room for the boys' clothes.

We also got a trundle to put underneath their bunk bed, for
sleepovers. The boys are very excited about all of their new stuff. :)
Posted by Mama Bree at 7:13 PM No comments: 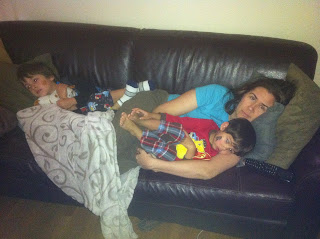 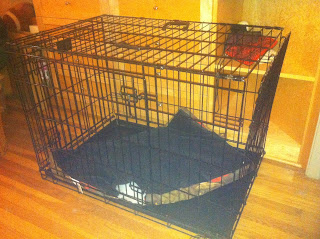 This time I locked all of the doors. But persistent Tobey literally
bent the side of the crate open in order to get out. Determined to do
what you ask?

Today was my last day

A walk down Tellme memory lane this morning. I'll miss working with the great friends I've made over the last 6.5 years, but excited about the next adventure I'm about to tackle (on Monday).
Woo! :) 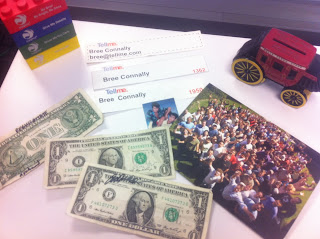 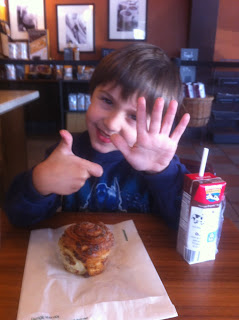 I took Logan in to get four different shots this morning, in
preparation for his Kindergarten registration coming up (a big
milestone - yikes!).

He didn't whine or squirm or cry. In fact, he looked at Dr. Safir
after the first two shots and said "What? That didn't even hurt!"

Suffice to say, Safir and I were very impressed and proud of his
bravery. And, as a treat, we're now at Starbucks chowing down on his
favorite, a morning bun. ;-)
Posted by Mama Bree at 10:50 AM No comments: