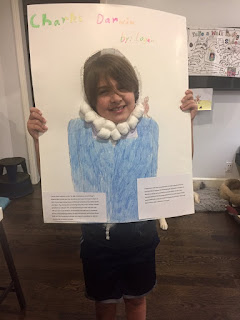 Logan has come a long way with this biography report. He stomped and whined and huffed a lot during each stage of the process, but his end product (and presentation) is looking pretty good.

One of the paragraphs he had to research, and write, about, was his subject's accomplishments. After several of my requests to get started on his writing, he looked at me with an exasperated expression and said, "But Charles Darwin doesn't have any great accomplishments Mom!"

So, I had him re-read a couple of significant chapters in his book, and we talked about it for some time, before he was finally ready to start writing his report. 😉

He practiced his oral presentation, a few times (and without objection!), tonight - he seems as ready as he's going to be for class tomorrow. I'm just glad he's done!
Posted by Mama Bree at 11:12 PM No comments:

Callum's note for his class 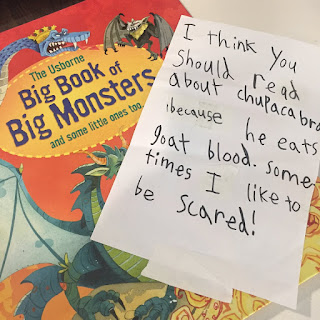 Callum brought his favorite monster book to school to share with his classmates. And added a tip about which section to read. 😂😂
Posted by Mama Bree at 12:32 PM No comments: 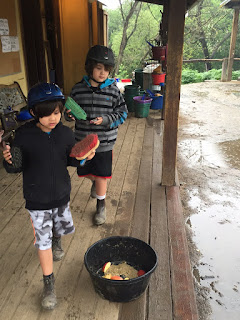 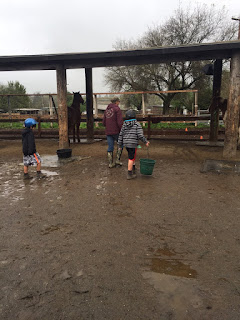 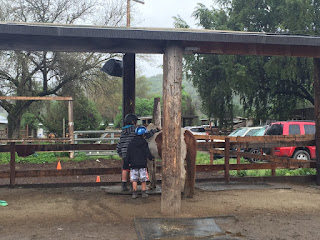 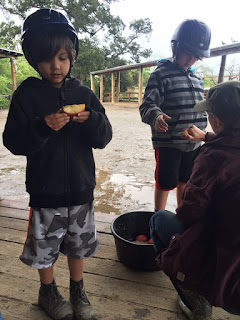 Since it was raining yesterday, the boys didn't get to ride. But they learned about how to groom, feed and care for the horses instead (which they enjoyed almost as much as riding I'd say!). :)
Posted by Mama Bree at 7:08 PM No comments: 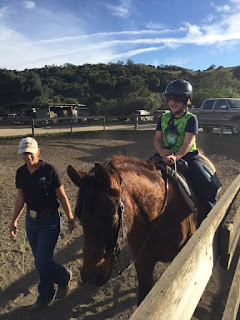 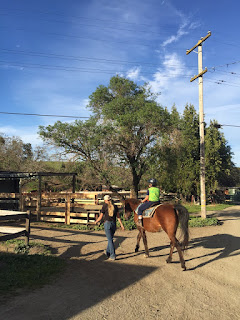 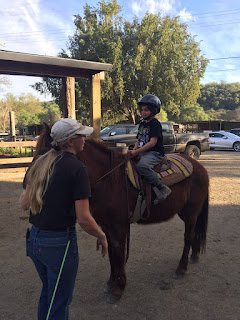 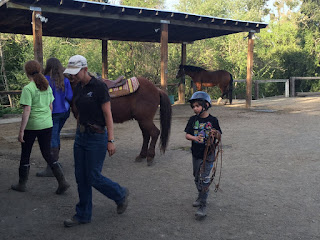 Today was the boys' first horseback riding lessons. Jon and I have wanted to get them a bit of exposure around horses, since both he and I have had a little bit ourselves growing up (if I had the room, I'd own horses myself!!).

Callum was pretty nervous and freaked out anytime Eddie (his horse) would move about. He was able to ride a few steps here and there around the mounting area but wouldn't tolerate much more.

Logan, on the other hand, was terrific! Which was surprising, since he was more afraid and uninterested of the lessons than Callum when I mentioned them. :) But he mounted right away and listened to the trainer carefully. Before we knew it, he was off walking to a nearby arena where they practiced a number of handling lessons (mostly how to steer the horse forward, back, and turns left or right). He had a really great time, and I think because of that, Callum gave it another try toward the end to see if he could last a bit longer (he did, but still bailed out early).

It was so fun to be out there, hanging around the ranch and watching all the horses coming and going. And, of course, watching my boys learn how to ride!! Hopefully they'll want to continue for a few more lessons, at least. :)
Posted by Mama Bree at 9:53 PM No comments:

Another day, another poke 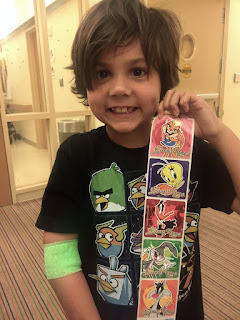 The boys are off school today, so I've packed the schedule with Dr appts 😊

Earlier this morning they both had their teeth cleaned at the dentist. This afternoon Callum had his monthly lab and exam (all continues to look great).

Even though he's wearing green today, poor guy still got a poke. Hopefully the green bandage wrap will help ward off any other pinches. 😜
Posted by Mama Bree at 2:51 PM No comments: 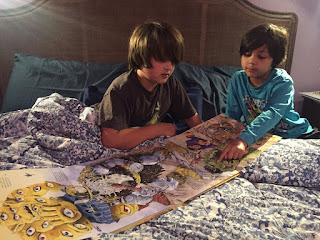 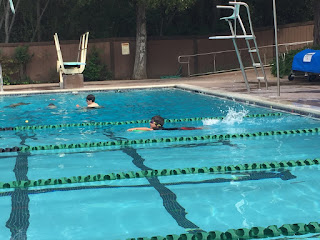 Now that basketball season is done and it's starting to warm up, the boys are back at it with swim practice. 🏊🏼👍🏼
Posted by Mama Bree at 4:57 PM No comments: 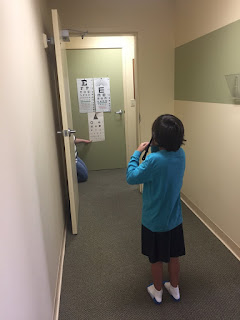 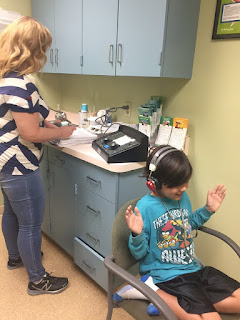 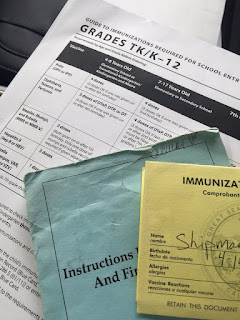 Today, Callum got caught up on all of his vaccines and did a wellness health exam (which included an eye exam and hearing test). Normally these are done before Kindergarten so it's been a long time coming. We have no idea where he'd be if he hadn't had chemo, but he's looking good on the growth chart as is (85% in height and 75% in weight). He also passed his eye and hearing exams with no problem. 👍🏼

He DID however, have a major issue with all of the vaccines (and TB test). Poor guy screamed bloody murder, as if he's never been poked in his life. *sigh*

Luckily, we got through it all and he's happy to hear he doesn't need another shot (other than his flu shot anyway) until he's 10. Yippeee! 🎉
Posted by Mama Bree at 4:18 PM No comments:

Loganism of the 3rd grade?

I was at the boys' school this morning doing a few things and ran into Logan's teacher, so I chatted with her briefly. They're working on writing various stories right now.

On one assignment, she asked the class, "Does anyone know what a rhetorical question is?"

Logan raised his hand and said, "Oooh I know this one! It's like when you ask, 'How many times do I have to say no?'"

My own med schedule 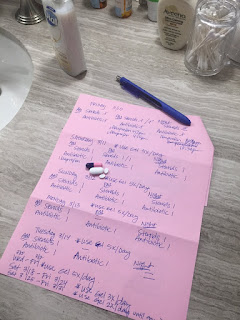 I feel like maybe I should've charted my own med schedule, similar to how I used to do Callum's! 😂😂😂
Posted by Mama Bree at 10:38 PM No comments:

Signs of a stroke? 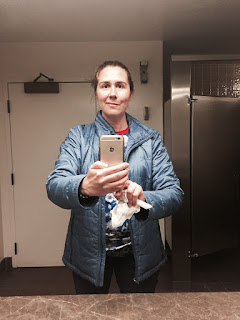 Or maybe just a face that's half numb. 😜

I stopped by the bathroom on my way out this morning, after another (successful) gum surgery.... And was surprised to see how much the right side of my face was drooping! I even tried smiling for this pic!! :)

Hopefully this will be the last gum surgery I'll need for at least another 10-15 years. *sigh*
Posted by Mama Bree at 4:50 PM No comments:

Apparently several hours on neuropsych exams works up an appetite. 😜

Today's round of testing was a follow up from tests Callum did about 3 years ago, at the start of his treatment. Back then, I had the hospital conduct some tests so we'd have a baseline of his neuro cognitive abilities before treatment. Today's test will give us a baseline post treatment.

One of the bigger (and long term) side effects of Callum's chemo is a delay in learning abilities. And, I want to make sure we track it closely (and create a paper trail for me/the schools) in case we run into any issues down the road.

Thankfully, the Drs don't have any concerns right now (nor did back when we started treatment). In fact, what the Dr told me after the tests today was, your kid is super smart... but is chatty/has a short attention span.

I laughed and almost said "Have you met my husband?" 😂😂😂 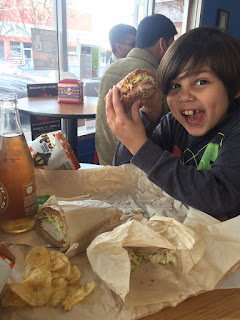 Sent from my mobile device
Posted by Mama Bree at 1:52 PM No comments: 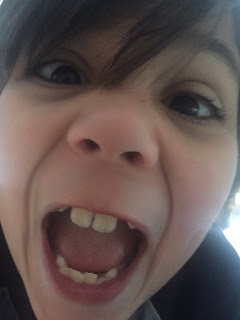 Early this morning I saw Callum leave his room, head to the kitchen, then come back to our bedroom all squinty eyed and half awake. He was holding something in one hand and a paper towel up to his mouth with the other.

With a muffled and sleepy voice he says to me, Mom, I lost another tooth!

Whoa cool! Did it fall out just now? While you were sleeping?

Well I woke up and it felt loose so I just pulled it out. 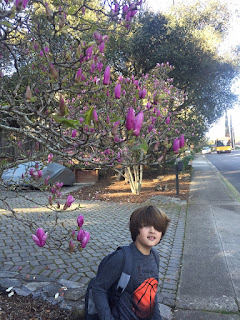 I was taking a pic of the beautiful spring flowers on our neighbor's tree while we were waiting for Logan's bus (earlier this week) and caught him (and his bus) in the snap.

I forgot I had taken this because I've been having major phone issues this week where I've lost pics and couldn't receive any texts. All of which is to say I was totally lost without either of those things! ;-) I finally had to take my phone in to have it looked at/repaired. They got me back up and running for now, but I'm not 100% confident my problems are totally fixed. Sooooo, a new phone may be in my near future. We shall see. ;-)
Posted by Mama Bree at 10:02 PM No comments: 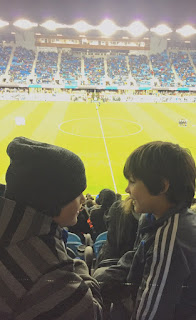 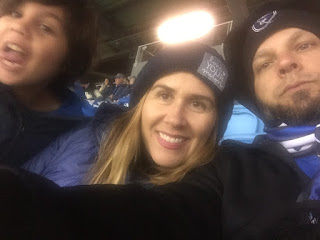 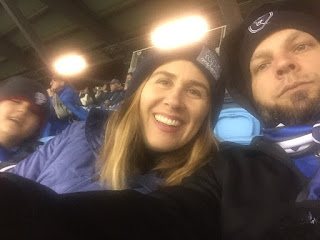 We had a nice family night at the Earthquakes Opening game day!

The boys mostly sat like this all 90 minutes. Wrestling and talking to each other instead of watching the (really good!) game on the field. But, we still all had a good time.

The last two pics are what I have to live with these days when I'd like a family selfie. Two pics because the boys can't both get into the frame at the same time. And instead of sitting still, they're all blurry with wiggles. *sigh*
Posted by Mama Bree at 9:38 PM No comments: