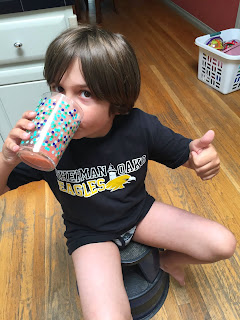 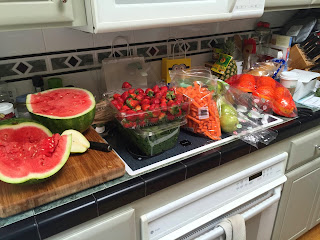 Callum fell asleep on the way home from Costco, so while he slept, I made Logan help me unload the car and carry everything into the house. He groaned the entire time but he was hopeful I'd give him some iPad time later on, so he remained agreeable and helpful.

Once the groceries were in the house (but not yet put away, mind you!), Logan plopped on the couch, heaved a big sigh and said, "So *that's* what a Mom's day is like!"

Because his playmate was still napping, Logan began to pull out all of the fresh fruits and veggies, wash them and ask me to help put them into the Vitamix. So, before I knew it, we were in full-on smoothie making mode! Phew!!

Have mercy on your soul.... 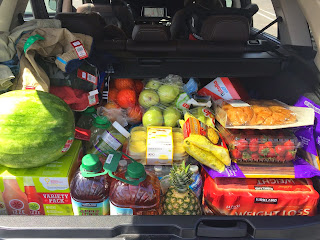 The lady manning the exit door at Costco took one look at my cart and the two hyper boys hanging off of it and then at me. She said, Wow - you got all of this by yourself, with these two boys?

I said uh huh, and now all I want to do is get home and collapse.

She nodded with great understanding and waved me by, without even checking a single item on our receipt. ;-)
Posted by Mama Bree at 4:36 PM No comments: 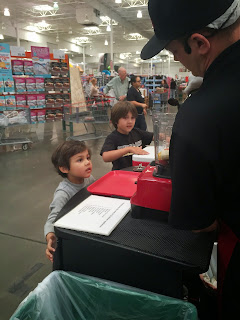 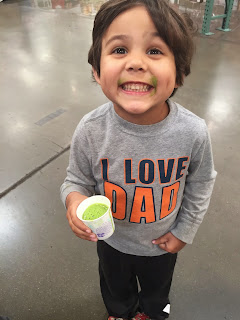 The boys discovered the Vitamix demonstration guy while we were shipping at Costco today and have had about 6-7 samples each so far.

They've made me get a ton of fresh fruit and veggies so we can make more smoothies at home. I guess there are worse things for them to beg me to buy. ;-)
Posted by Mama Bree at 2:52 PM No comments: 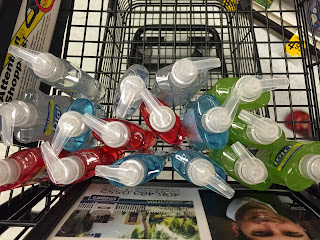 If you've been a long time follower of my blog, or if you know us well, you know I'm a grinchy grinch about throwing birthday parties for my kids when they were really little.  But, by the time Logan turned 4, and was old enough to ask for a birthday celebration, I caved in and said ok.  :)  So, tradition should follow that I would then throw Callum's first birthday party, at age 4.

Sadly, he was too sick and too much in the thick of his treatment last year, to enjoy a proper birthday party when he turned four (and we couldn't have had anyone over at the house during that time anyway!).  We had a smaller gathering a little later, to make up for things, but I don't think it was the same.

So, you can imagine the anticipation and build up, that this birthday has been for little Callum!  Not only was he turning FIVE (which he'll remind anyone who will listen to him, daily, that he's now five), but he was going to have his own birthday party, with his own friends, and own cake, and own prizes, and own piñata, and....it goes on and on.

Only - sadly, I've been SO DAMN SWAMPED AND STRESSED this month that I really had NO oomph left in me to really make it the magnificent bash that I usually try to do!  So, it didn't get as much attention - but I don't think any of the boys finally noticed.  ;-)   Everyone had a terrific time, and that was the most important part.

With that said, here are a number of pics I shot, during the prep leading up to the party and a handful of the party itself, to share with you.  :) 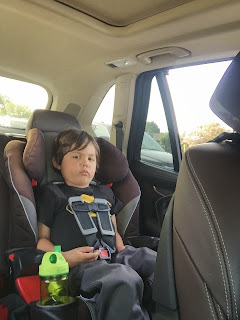 Steroids doesn't just bring the food cravings, it brings the emotional ups and downs too. Here's Callum giving a pretty solid pouty lip, because of something (who knows what) that his brother said to him.

I have to admit though, even his pout is pretty darn cute. ;-)
Posted by Mama Bree at 6:39 PM No comments:

Making friends at the tile shop 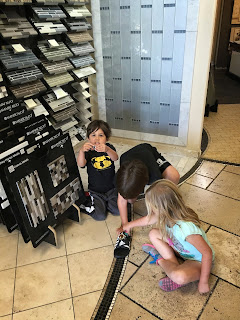 The boys are having to get used to me dragging them around everywhere while I pick out materials for our remodel. Luckily another kid showed up to hang out and play with them, which helped. :)
Posted by Mama Bree at 5:32 PM No comments: 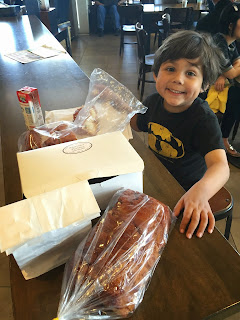 Callum has been obsessed with this monkey bread at the local pastry shop (in between the hospital and our new home) and has been asking for it all week long. I told him we could grab some after his chemo appointment today. 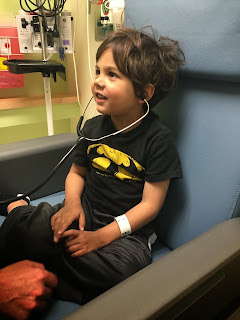 Today was another chemo (via IV) appointment at the hospital. Everything went great.

His counts look good, his lingering cough has lessened, and surprisingly, he wasn't affected as much this last week with the steroids as before (he had a few outbursts each day, but it didn't feel nearly as extreme as past steroid pulses, thank goodness!).

Last night was his last dose of the steroids so now we're back to "normal" again, and return in another few weeks for another dose of chemo (via LP). :)
Posted by Mama Bree at 10:50 AM No comments:

A visit from our DC friends! 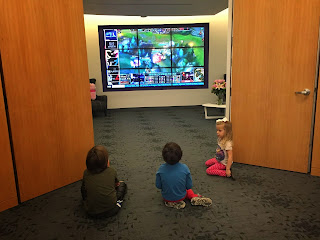 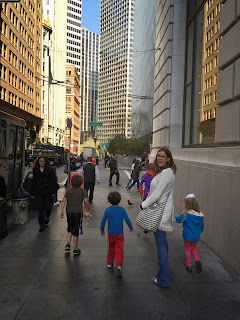 To further prove we truly live in a small world, I'll share my story of Jill and David.

Jill and I met at Georgetown, where we went to grad school together. She met David (now her husband) while we were in school so I got to know him then too. We graduated and went our separate ways, but stayed in touch. Jill and David remained in DC but of course I returned back to CA (and met Jon soon after I returned). Anytime they came out to CA I'd meet up with them for a lunch or coffee and when I returned to DC (sadly I've only been back once since I graduated!), I stayed and visited with them for a night.

Fast forward many years later where Jon has been successfully moving forward at Twitch and Amazon. David, meanwhile, had worked many years at a private company in DC but moved to Amazon (still in DC) about the same time Jon moved over. Jill and I thought, how neat that our husbands now worked at the same company (but never thought they'd actually run into each other given we are on different coasts and it's such a large company).

But! It's not as large as you think ;-) A big project Jon was working on, brought he and David together just a few months ago. So, our two husbands met and worked side by side, putting in many late nights for several weeks. How funny!

David shared with their kids how he was working on this project for a company called Twitch, which just so happened to be a company that his son (also named David) was a big fan of. :)

Just this past week, Jill and their two kids decided to join David (he's out here for a conference) on the trip. She asked if it would be possible for me to arrange a tour of Twitch for little David, the big fan. Of course I said yes!

I picked up my boys after school and we headed up to the city to meet them at the Twitch office. Jon walked us around - the kids got their fill of free snacks and video games and had a great time. Jill got a fun pic of the kids and Jon (little David in his purple Twitch shirt) which I'll have to share later after she sends it to me. :)

After, we walked with them to the nearby Apple Store before heading home. Jill and I got to catch up on life (as much as you can, anyway, while walking the streets of SF with four hyper kids running around!) which was nice as well. It was so fun to see them, even if our visit was too short. We both agreed we'd need to do another visit sometime very soon! :)
Posted by Mama Bree at 10:25 AM No comments: 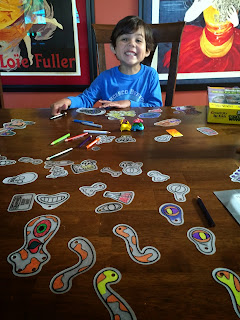 Today, our youngest rascal turns 5! My how time flies.

We've spent the day swimming, eating yummy foods, and most importantly, making and then playing with monster shrinky dinks!

Happy birthday kiddo. We love you dearly.
Posted by Mama Bree at 6:06 PM No comments:

Prepping for the party! 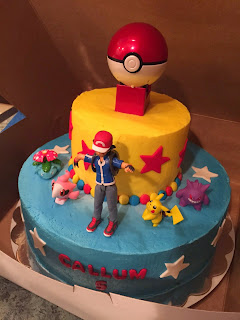 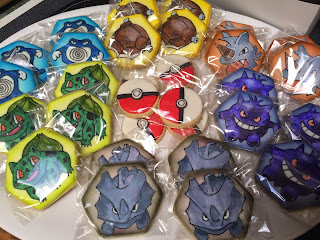 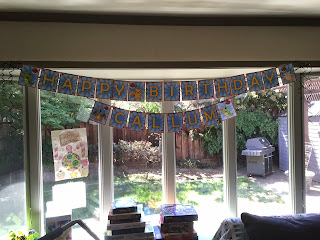 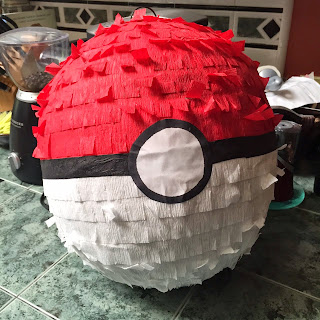 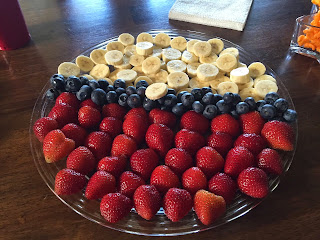 I'll post better pics tomorrow after I've had a chance to recover! But for now, I thought I'd share a few pics I took while prepping for Callum's 5th birthday party today. :)

Callum had a fantastic time (as did Logan), I'm beat but happy it turned out well.