Eggs have been dyed! 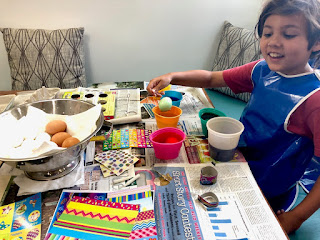 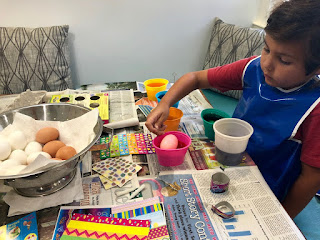 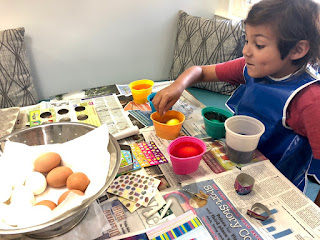 No promises on whether I'll get them hidden in time tho. 😜
Posted by Mama Bree at 3:27 PM No comments:

Calling on my Irish roots 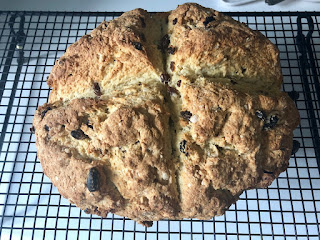 My first attempt at making soda bread today.🍀 Quite simple and ridiculously delicious! (especially paired with my afternoon tea and a smear of marmalade!) 😋
Posted by Mama Bree at 4:01 PM No comments: 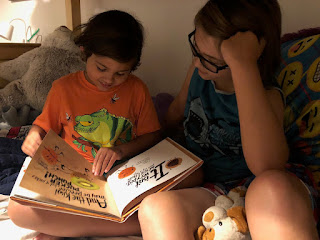 Callum's class goes to the library on Tuesdays. So, he's always coming home on Tuesday with a couple of new books that he wants to read.

Last night, the boys had a grand ol' time, reading this book that Callum had brought home. It was also late, so they were especially giggly. ;-) But it was darn cute.
Posted by Mama Bree at 6:08 AM No comments:

Happy birthday to me! 🤩 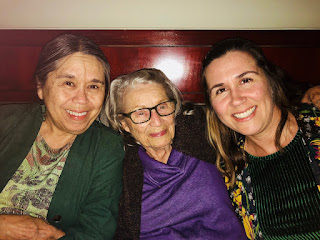 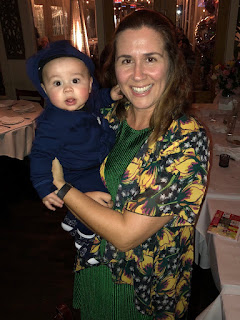 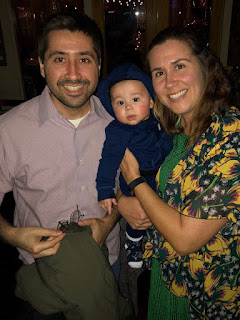 Had a delicious dinner with my fam tonight. Grabbed a couple pics after....with some of the oldest, and youngest, in our group! ❤️

Doesn’t everyone QA before go-live day?

Callum and I are prepping for his birthday party next month. So, naturally, we needed to buy a few cupcakes to taste test. 🤷🏻‍♀️🤣 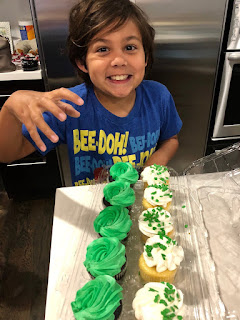 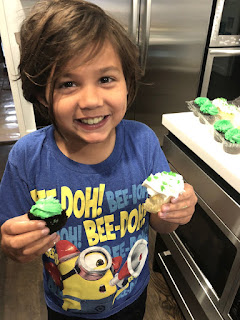 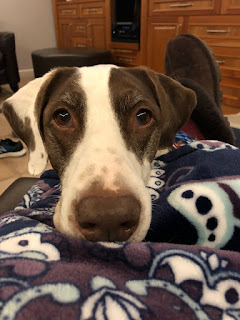 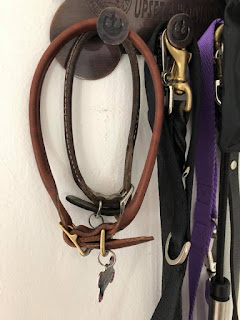 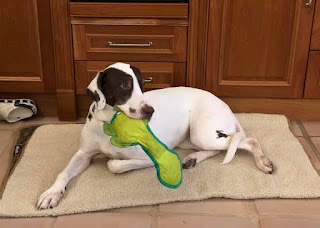 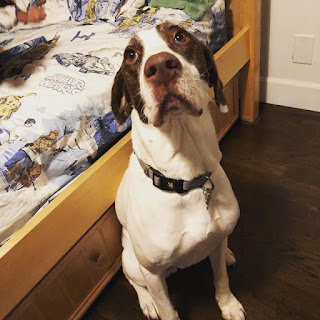 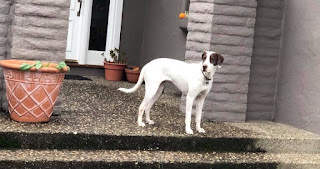 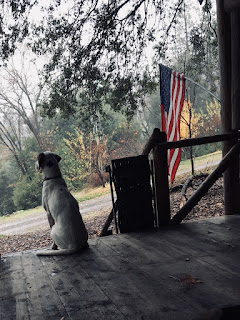 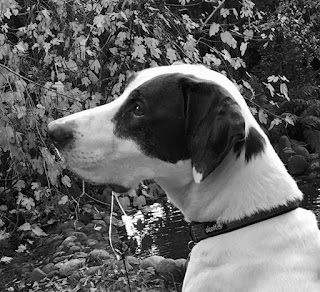 We had a hell of a weekend and it's taken me a couple of days to regain my composure, so now I think it's time I blog about it.

She had actually been acting a little off all last week. But it was this strange behavior where one day she'd be a little quieter and more lethargic than usual (she's normally a big ball of excitement and chaos), and then later that day or the next day, she'd be back to her springy hyper in-your-face old self.

So, I had been emailing back and forth with our vet for a couple of days but we just decided to keep an eye on things and hope she'd turn a corner.

But, Friday morning she was much much worse. And, it really worried me. So, I called the vet to say I was on my way, coaxed her into the truck (which she had difficulty doing, so I knew there was something wrong!) and headed on in. The minute our vet saw her, she was pretty alarmed. Daisy was extremely pale (how can you tell with a dog, you may ask? Check their gums and inside their ears! Hers was white as a sheet - they should be a healthy bubblegum pink). This paleness meant, most likely, she had some internal bleeding. So while they were prepping her for blood work and an X-ray, our vet was prepping me for next steps.

She thought Daisy most likely had a splenic tumor which had burst (therefore the bleeding). They were going to confirm via X-ray but what I'd need to do next was rush her to the ER Vet, so they could get her into surgery.

So, we hightailed it out of there and raced across town to the ER Vet. They were expecting me and took Daisy back immediately to begin diagnostics. After a couple ultrasounds, chest X-ray and an IV with fluids - they had concluded that she DID have a splenic tumor, which had burst, and needed to be removed right away. There were no signs of metastasis, which was good, so we approved moving forward with the surgery. I gave Daisy some really big hugs, told her she'd be in good hands, and that I'd see her after surgery (she'd have to stay overnight).

Her surgeon called me Friday evening after the surgery was done and reported all went well, and she had done great. She was getting a transfusion since she had lost so much blood but otherwise was in great shape. Same report on Saturday morning - she was eating and peeing, stable and in a good mood. Saturday afternoon they said she was doing so well they thought she was ready to go home. So, I came by to pick her up. She was super excited to see me and, it seemed, happy to be home. Phew!!

Unfortunately, early Sunday morning she got really restless and seemed very uncomfortable. She couldn't find a good place to rest and quickly looked ill. She began panting and had very labored breathing. She could hardly raise her head, or move. We knew something was really wrong - and while we waited for the surgery team to get on the line, we started preparing ourselves to rush her back to the ER.

She couldn't stand well on her own, so Jon carried her out to the truck. We laid her down and I hugged her goodbye. I didn't have a great feeling about it and wanted to make sure I gave her one last kiss. Right after I did, her body went limp - she was alive, but just barely... and sometime on the drive to the ER, she passed.

While we don't know exactly what happened, the team is pretty sure she threw a clot, which unfortunately can happen, even to healthy dogs, post surgery.

I was an absolute wreck the rest of the day - her death was a huge shock to me. I couldn't hold it together for more than a few minutes at a time. I was a walking zombie and was just barely able to participate in our talks with the boys, when we broke the news (they were both still asleep when everything happened).

We rescued Daisy a year ago (almost exactly). We don't know anything about her history, but do know she was the happiest and most loving protective dog ever, while she was with our family. She was so full of life and could hardly keep still - ever! We think she was about 4 years old this year - much too young to leave us - but we hope she loved her home with us, as much as we loved having her. She will be sorely missed.
Posted by Mama Bree at 5:21 PM No comments:

Swimming doesn’t get rained out! 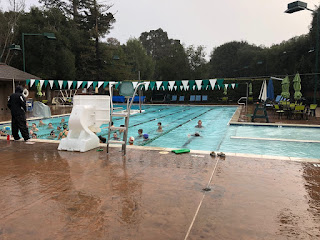 It might be blustery and hailing, but swim lessons don't stop! 👍🏼
Posted by Mama Bree at 4:47 PM No comments:

I forgot to post this as well, but Logan (and Jon) attended the Stanford Women’s Basketball game, with Logan’s class, a couple of weeks ago. 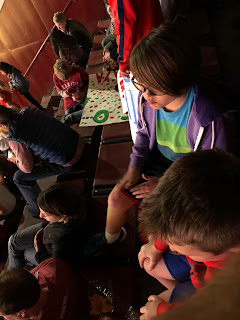 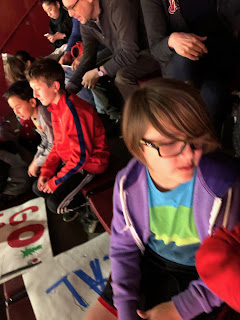 Logan’s class has had the fun opportunity of writing letters back and forth with the women’s basketball team. In their most recent exchange, the class’s pen pals invited them all to their game against Cal. :)Jon and Logan didn’t stay until the very end since they were getting tired (it was a school night and a late game), but they had a bunch of fun and enjoyed watching the game. And, good news, Stanford won!!The class worked the day before the game creating and painting awesome posters (see Logan’s here), and were also invited to do the Half Time High Five Tunnel!! 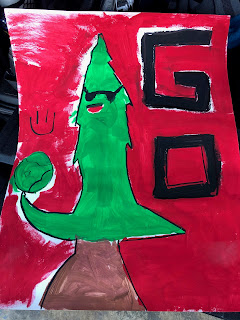 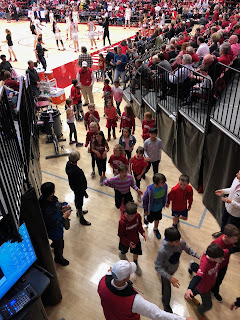 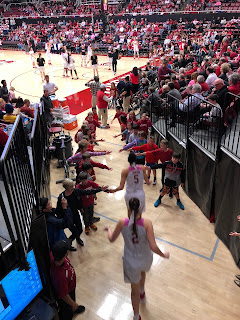 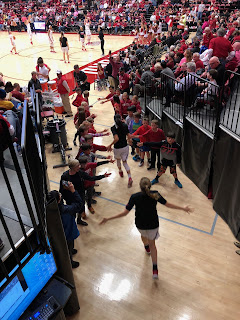 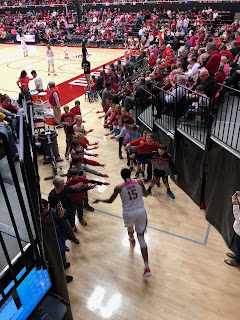 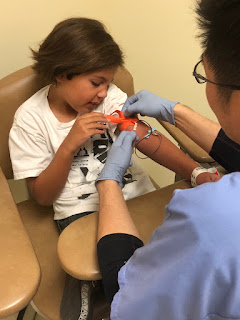 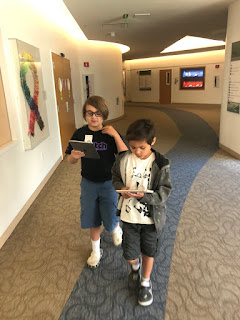 I forgot to post last week about our quick trip to LPCH, where we do Callum's routine blood check and physical exam with his oncologist. Everything continues to look great/normal, with no suspicion of a relapse, thank goodness!

Since the boys didn't have school last Monday, Logan got to tag along with us. And the two walked the halls playing on their iPads the entire time! 🤷🏻‍♀️
Posted by Mama Bree at 8:05 AM No comments: