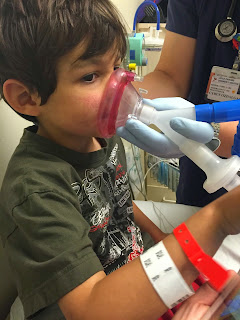 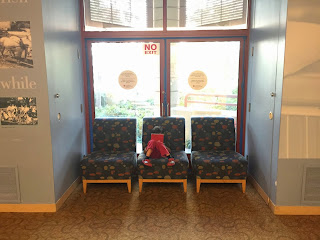 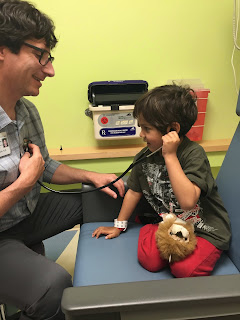 I forgot to post these on Thursday - but we had a big day at the hospital this last week. We've hit the 3rd cycle of Callum's maintenance protocol, and Thursday was Day 1! We're moving right along! :)

So, we headed in for labwork first (the poke was one of the best he's had in a long time - fast and no tears!) and his bloodwork looks great. Woohoo!

After his labs were drawn we headed to another part of the floor, the pulmonary wing, to get his Pentamidine breathing treatment (we now do this monthly, instead of weekly doses of Septra at home).

After we were done with that, we headed BACK to the clinic again to wait for his chemo. We had to wait outside the clinic (so there he is in the second pic, settled in nice and comfy on the couches, playing on his iPad) since he still has a cough. :(

It took awhile for his exam and to walk through all the questions with the nurses and his doctor. Plus, we had a new nurse (guy in the third pic) overseeing us this visit so we probably spent a bit more time with him than we usually do. As you can see, he and Callum hit it off quite nicely!

At the start of each cycle we do a 7 day "pulse" of steroids - so, after his chemo was done (vincristine via IV), I gave him his first dose of steroids before packing up to go.

Because it was such a long visit, he was pretty cranky and hungry as we were leaving the hospital. I had to stop by the pharmacy on our way out to pick up our refills - but they weren't ready for us - so I spent a very long, grueling 10 minute wait, trying to soothe a grumpy kid who was quickly unraveling at the seams about every little thing. Yay! *sigh*

(I know it wasn't the case, but it sure felt like those steroids had kicked in instantly that morning!)

I finally got him to calm down once we hit the road. We picked up some cinnamon bread at a nearby pastry shop (it's becoming a regular thing for us now) and that certainly washed away any last tears remaining. :)

He was in such a nice mood we even stopped by a lighting shop to check out some fixtures for the new house (since I'm now in remodel mode full time!) before picking up Logan from school. Phew!! What a day!
Posted by Mama Bree at 9:43 PM