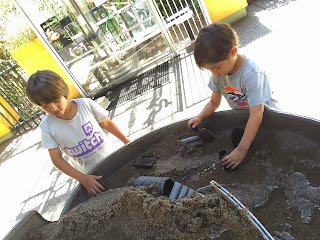 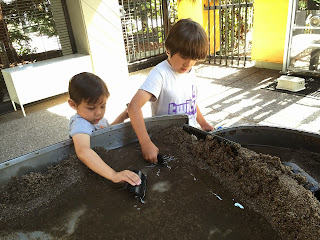 Logan had an in service day today, so we headed up to the Curiodyssey Museum and Zoo again, since our passes expire at the end of the month. The boys had a lot of fun exploring (here they are building a dam at the water/sand table). We tried a nearby playground after, but it was super duper hot so I called it quits after about 20 min in the heat.

I thought frozen yogurt would be a nice treat with the heat so I did a quick search for nearby places, and found one rated really well! But didn't pay attention that it wasn't your typical frozen yogurt chain, and instead some foodie Greek yogurt (not frozen but fresh) place. It was still delish but not exactly what I had promised the kiddos (and Logan declined having any). Ah well.

They both fell asleep on the way home and 2.5 hours later, Callum is still napping! Phew, what a day!!
Posted by Mama Bree at 6:28 PM