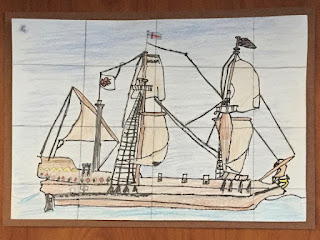 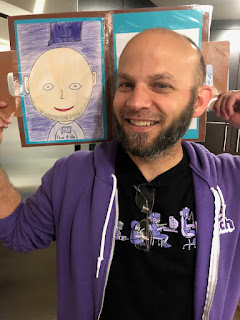 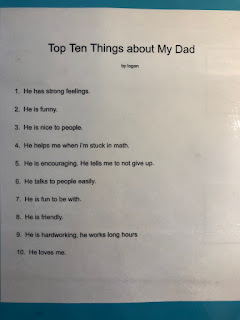 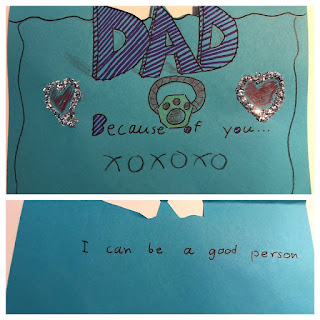 Logan's class held a celebratory party earlier this week, inviting a special someone from their family to attend. They talked about a couple of books they read in class, and then presented a couple of special pieces of work they did for that person.

The party was supposed to be last month - and I was all set to go - but then they had to cancel at the last minute and rescheduled it to this week. Unfortunately, I had a conflict with the new date, so we arranged for Jon to go instead.

THEN. The night before the celebration, Jon had some last minute changes at work which required him to be in the office. Something he unfortunately couldn't get out of. It was pretty upsetting for Logan (he, and everyone else in the class, had been working on this for several weeks), but he finally perked up with the idea that my Dad would come instead, to represent the family. :)

My Dad took a few pics of the work around the classroom, but this first one posted is my absolute favorite. Logan's drawing of a ship he did during their studies of Columbus. Amazing! Right?!?

The next few are ones I took later in the evening when Logan showed off all of his work to Jon (who he had originally made it all for).

That portrait of Jon is basically spot on. 😉

When Logan introduced my Dad to the class (and other parents attending), he said, "One reason my grandfather is special is because he took a 40 minute drive just to see this."

Definitely one of many reasons we appreciate and love you Dad!! Thanks so much for being there for me, Jon, and especially, Logan. 💜
Posted by Mama Bree at 11:09 AM