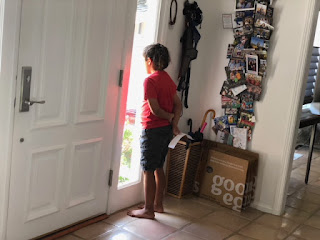 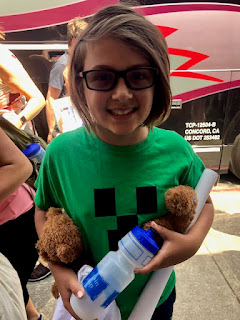 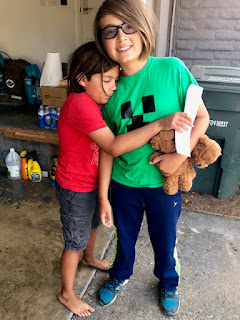 Every 30 minutes or so, this morning, Callum would ask what time it was, and if it was time to go pick Logan up. He was soooo dang excited!!

Then, about 5 minutes before we needed to leave, he had an upset stomach and couldn't go - so I left him home with Jon and headed to the high school where we were to pick Logan up (he took the camp's charter bus home).

The first pic is what Jon texted me while I was sitting in the high school parking lot, waiting for Logan's bus to show up (they were late). Poor Callum was literally waiting by the door. ❤️

The next was a quick snapshot I caught of Logan after he got off the bus. I was surprisingly emotional when he arrived - I was relieved, and so happy, to see my son again.

And the last is of the two boys once we got home. I had parked in the driveway and Callum opened the garage door and ran out jumping up and down like crazy and then embracing his big brother. He missed him so much and was so very glad to have Logan home again. We all are!!

It was also sweet to see that half of the stuffed animals he purchased from the camp store were gifts for Callum (you can see a couple of the bears in his arms in the pics). After big hugs, they ran inside to solve Callum's scavenger hunt - which was also pretty dang cute.

Logan had a really amazing time. He was pretty dazed and tired when he got home and just zoned out for a bit watching tv and playing on his laptop. But I knew he'd sorta need the space and downtime to just chill. He chatted a bit when we drove home, but it wasn't until much later this evening, after he had re-energized a bit, that you could see his mind racing as he excitedly told me all sorts of stories about his time at camp.

All that said, he seems really happy to be home too. There were friends who didn't want to come home and wanted to stay at camp longer - but that wasn't Logan. He told me one week was long enough - maybe a little too long - but he was still glad he went. I guess we'll see what he thinks about that next year! ;-)
Posted by Mama Bree at 11:04 PM