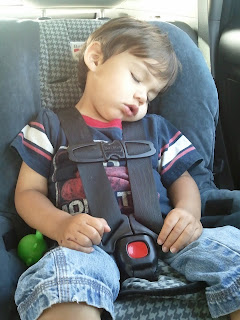 We had Callum's 18 month check up today. Logan tagged along and during the entire visit complained that Dr. Safir wasn't paying any attention to him. :) (He loves going to the doctor's office - no idea why!)

Callum is developing nicely. He's put on another pound (24 lbs, 11 oz - 50%) since his last visit and has grown over an inch (34" - 90%), still trending taller than average, and his head circumference is 49cm round. He feels like a big kid to me!!  He's very curious and observant, the doc noticed, and also pretty sensitive. :)

Both boys received shots today which was the lowlight of the visit. :( Logan was up first, for his annual flu shot.  I don't think he was quite expecting to get a shot so it took him by surprise and he just bawled his eyes out. This actually made things worse for Callum, who saw his brother crying and got upset and started whimpering BEFORE it was his turn! So you can imagine how upset he then became after his shots (also a flu shot plus a Hep A vaccine). It was pretty miserable trying to calm down both boys, who were both inconsolable. :/

Our biggest challenge right now is that Callum is still waking up in the middle of the night. And, because he's so old, it's now behavioral and needs to be fixed ASAP, before Jon and I lose it. (We had made great progress until he started having major constipation issues, which disrupted any sleep training we had been successful at!)

Hopefully we'll have better luck this time around. :D
Posted by Mama Bree at 9:52 PM