When I got back from New Orleans, I immediately put the boys to bed (it was late) and then started up my usual "just got home" routine, unpacking bags, starting up laundry, etc.  Our house/pet sitter left me a note telling me the animals did great all weekend long, and that I'd need to feed them that night when I got home.

So, I fed all the animals, but noticed our usual loud and demanding Sanka was nowhere to be found (or heard).  The cat food dish had been left out, however, so I assumed she had already eaten.  I gave her her normal evening insulin shot (she's diabetic) and finished up with my chores before bed.

The next morning (Monday), I noticed Sanka was still not interested in eating.  What's worse, she was laying by the water bowl but totally not interested in drinking, even when I moved her closer.  I then carried her to her food for the morning but she wouldn't budge.  Not interested.

So, I decided to call the vet.  We had an emergency with her a couple of weeks ago where her blood sugar had dropped through the floor - I was worried maybe her sugar levels were out of whack again.  But, the vet tested her levels and everything looked normal.  She was, however, very dehydrated (not a huge surprise since she wasn't eating or drinking) and her temp was lower than normal (not a great sign).  I left her with them for the day so they could get some fluids back in her, and give her an appetite stimulant to see if she'd eat some.

When I picked her up that afternoon she was doing better.  Her sugar levels were still normal - and she was better hydrated and while not a lot, ate a little bit too.  The vet sent me home with some meds to help stimulate her appetite if she stopped eating again.  My instructions were to get her back to a stable state where she'd eat and drink again - since she was clearly not feeling well.

She did ok Monday night and seemed ok Tuesday morning.  But by the time I got home Tuesday night, she was in a sad state of affairs again.  In fact, she was MUCH worse than the previous couple of days.  I called Jon that night to let him know I was pretty sure she was on her last breath, that I'd be taking her back to the vet the next morning but that I was afraid we may need to put her down (something we had already discussed earlier when I was noticing her odd behavior).

She was extremely lethargic and still, not moving at all when I came to check on her (she was laying on our bed).  I picked her up and carried her to her food, but she just slumped down and laid next to the food, not interested in anything.  I tried holding little bits of kibble in my hand up next to her mouth, but nothing.  I took one of the pills the vet gave me, crushed it up, mixed it with water, and fed her the water through a syringe (since she also wasn't drinking out of the water bowl I put next to her).  She hated the syringe and kept spitting the water out.

That night, I made sure to put her next to the heat register, wrapping extra towels and blankets over her to keep her warm.  She cried out a few times in the middle of the night, not her normal meow but a very pitiful cry for help.  :(  It was about 1am, but I got up and searched for her (she wasn't in her bed anymore) and found her just lying very still, in her litter box.  It was alarming to find her there, because she really did look dead at that point, her energy was so low.  :(   I picked her up and carried her back to my room for the night, figuring she may not make it through the night and she'd want to be near me and the dogs.  I pet her awhile until she went back to sleep (she did finally purr a bit which was great), but was so worried I kept waking up throughout the night to check on her.

By morning, she again looked dead, she was so still and without energy.  She wasn't, so I wrapped her up and took her back to the vet (I took the boys to school first because I didn't want them to be with me if I needed to put her down).

Sure enough, she was in a horrible state.  She was extremely dehydrated with a very low temp again, worse than before, and the vet was pretty sure her kidneys weren't functioning anymore, but instead shutting down.  He remarked she was likely "knocking on death's door" :(

I called Jon, teary-eyed and gulping down sobs, in between relaying what the latest prognosis was.  It was extremely hard for me because I so wanted Jon to be there and see Sanka one last time.  But, we decided, given how much pain she appeared to be in, her age (18), and that even using extraordinary efforts to prolong her life, the doctor thought she'd likely only last a few more days, we decided to put her down.

I stayed with her while while the vet and nurse gave her the shot.  They were incredibly gentle and kind through the entire process and we talked about how interesting it was that a young man (Jon) would have kept this cat (Sanka) with him for so long.  The vet remarked how unusual it was, and that usually men will part from their cats at some point in their lives, not taking them along with them, or for so long.

I agreed.  As a final story before Sanka left us, I described to them the first time Jon and I met and started dating.  Sanka immediately took to me, which really impressed Jon.  Apparently (so he told me), she "hated", hissed and clawed at any previous girlfriend he had dated, and she had never liked any of his girlfriends like she liked me.

The vet so wisely observed,

Aha, so Sanka approved.  She chose you.

And, driving home that morning thinking it over, he was probably right.  She definitely did approve of me and seemed to love me endlessly.  I like to think there are many reasons why Jon chose me.  But, it's quite possible that was also one of them.  ;-)


When Jon returned home yesterday, I think it finally hit him - hard - that Sanka was gone.  He posted on Facebook about Sanka's passing later that evening, and I think his post sums it up nicely: 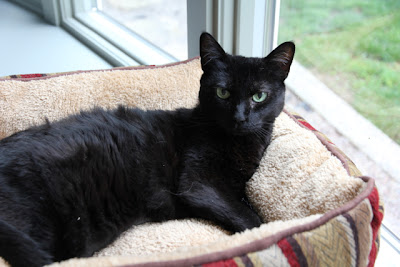 I said it to him, and I'll say it here to you. I'm so sorry you lost your girlie. *hug*