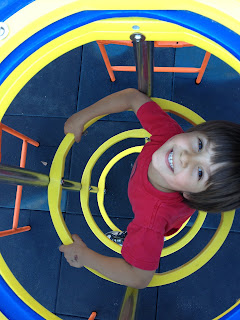 1) Logan told me tonight that his friend Haris is 5 yrs old, he
(Logan) is 4 yrs old, but he's still bigger than Haris. Really, it's
true Mom! We measured and poof! I'm bigger.

2) His fingernail has (finally!) fallen off, from his broken finger a
few months ago.

3) One of Logan's teachers sent me this adorable picture of him this
week. His school installed a new play structure recently (partly due
to his accident on the see-saw a couple of months ago) and Logan has
been SO excited about it (the kids have been watching as it's been
built) that the first day it was installed, he didn't want to get off
of it and stop playing.

He was so adamant about not losing his spot on the structure and
continuing to play on it, that he had THREE accidents that day! Even
worse, they were poop accidents. :(

Until I found out about the play structure I was baffled how this
could even happen, since he hasn't had an accident literally for 2
yrs..... And was worried we were suddenly going thru some regression
phase.

But no, now I know, I just have an ultra stubborn son.
Posted by Mama Bree at 9:34 PM