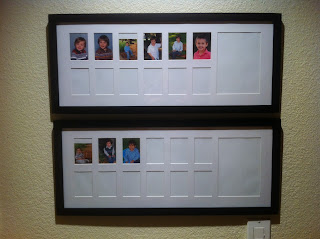 I've been looking for a nice frame that would allow me to capture each
school year pic all in one frame, but everything I found I either
didn't like (the style) or it cost more than I was willing to pay for.

Then! I stumbled upon these simple frames, which is exactly what I've
been looking for *and* at an inexpensive price! Even better, Michael's
was having a 60% off sale on select frames and wouldn't you know my
luck?! I snagged these babies on the super cheap with hardly a
thought. ;-)

Since they're meant to capture Kinder thru Senior year, and we only
have one Kinder pic so far between the two boys, the frames looked
pretty naked. So for now, I've filled them with their preschool pics,
which still leaves them a bit bare, but not *as* bad. ;-)
Posted by Mama Bree at 8:59 PM