Saturday was a big Swim Team day!  Jon and I drove separately to the Championships that morning, because I wasn't sure how long Callum would last with a long, hectic, full day of swimming events (7 teams competed, so it's a MUCH bigger ordeal than any of our normal meets have been). 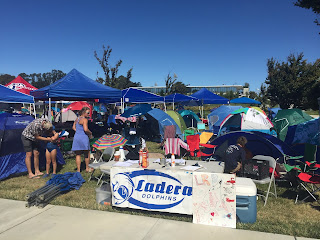 Sure enough, circling in the parking lot was enough for Callum to call it quits (it was jam packed and hard to find a spot).  So, he and Jon didn't bother parking and left to hang out at a nearby friend's house for a few hours, while Logan and I soldiered on.

We were a little late given the packed parking lot, but so were a lot of other folks, and we were still there in time to set up camp with everyone else, sign in, and have Logan do a couple of warm up laps before the meet actually started, which was nice. 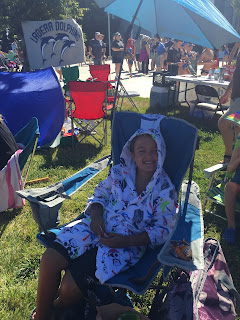 Here's a pic of the team doing their Ladera Dolphins chant, psyching themselves up just before the meet began.  I'm pretty sure we're the biggest team, at roughly 150 swimmers, of the 7 teams who competed in the league champs. 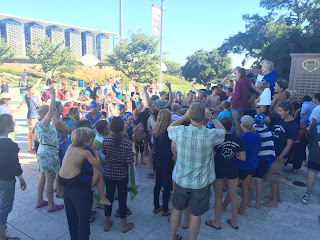 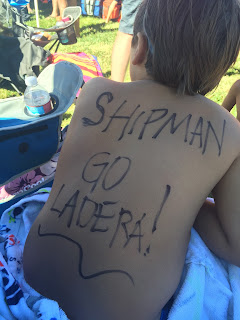 Logan decided that for his final meet, he'd give 3 events a try - so he was entered in the 25 Free (they don't start swimming 50s until age 9), 25 Back and 25 Breast.  It was a little confusing at first - the meet (and pool) was so big, that they were running two heats at a time, separately, on each end of the pool.  Logan started to get really nervous that he'd jump in the water after hearing the other heat's gun, vs. his own (he was just fine, but needed A LOT of reassuring from me and the Jr. Coaches, that we'd scream at him to jump in when it was time).  :) 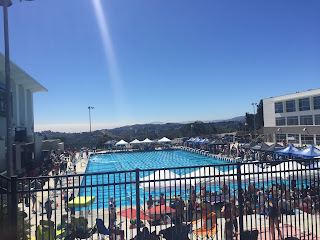 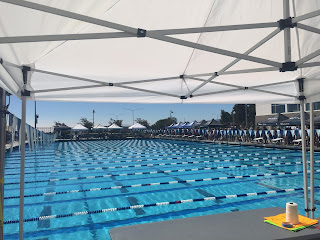 Here's a few of him just before he took off, and during, his 25 Free.  He did AMAZING.  He placed 3rd in his heat (but didn't place in the overall event, there's STIFF competition in Champs!) - but more importantly, got a HUGE time of 27.75! (His previous best was 29.80) 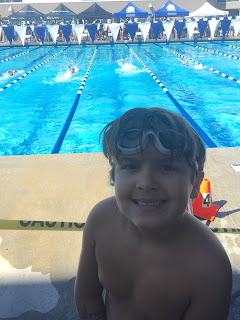 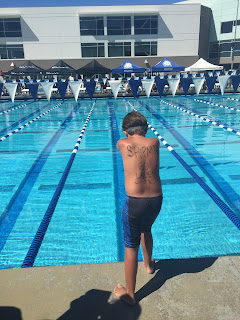 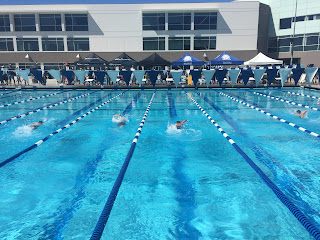 He was almost in tears when he got out, because he didn't think he did well - when I explained he placed 3rd (in his heat) and shaved off a ton of time on his best, he had a huge smile and was so proud after that.  :)

Here's Logan and his fellow team mates lining up to head to another event - goofing off and having fun! :) 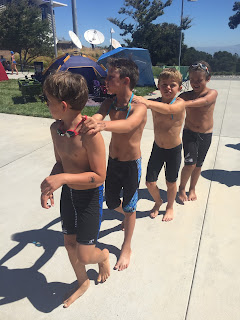 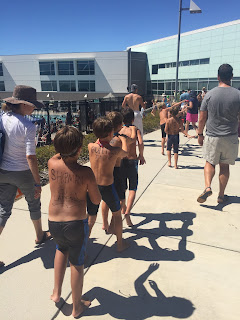 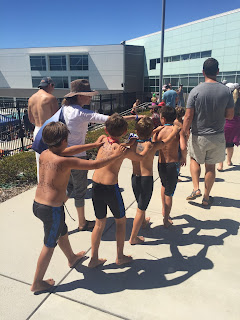 His Back Event was next (after long waits in between, mind you).  He didn't do as well on his backstroke - he had quite a bit of trouble keeping straight in his lane, which slowed him down quite a bit.  So, he was pretty disappointed at his time (he was last in his heat and probably close to last in this event) - but I reminded him that he's never actually competed in Back before, and hasn't really practiced it much.  And that, it just meant we would need to work on it more if he wanted to compete again in the future (which he agreed with and was okay with). 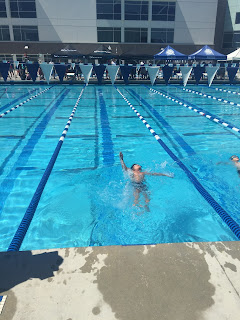 After another long break (I was also juggling a volunteer job on the side while we were waiting between breaks, so I was running all over the place), it was time for Logan's Breast Event.  This was also his last swim of the day, of the meet, and of the season! 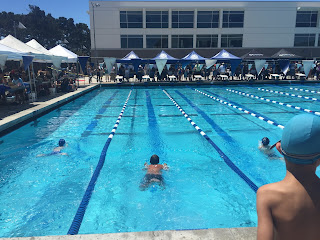 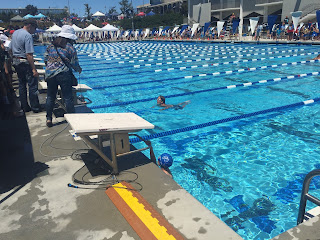 And, he swam another personal best in Breast!! He's actually quite slow in breast stroke but for some reason he likes swimming it (more power to him - it's a hard stroke!) - so he's again, one of the slowest out in the pool, but I love that he keeps going back out there and giving it his all.  :)  So, his previous best time was 1.00.62 (before that it was like 1.15, so he's really been working on shaving time off each meet) - and this time he broke the minute mark and came in at 57.87!!  I couldn't have been prouder.  :)

After his last swim, he was pretty pooped (and frankly, so was I!) - so we headed home, even though there was still a few hours of the meet left.  We later heard that our team won - naming us the West Bay Swim League Champs!  Woohoo! :)

We got home and rested a bit before heading to the Swim Team Awards Dinner later that night - where the entire team gets together for dinner, cake and celebration.  All the kids got little trophies (even Callum, who didn't actually compete this year but practiced with the team, so he was particularly thrilled) and some of the MVPs of the team are recognized for their stellar contributions.  Each year, one of the parents likes to put together a video at the end of the season, with a collection of pictures and music, etc. that he and others have taken throughout the season - it was a lovely collection of our Swim Team summer and we absolutely loved it.  :) 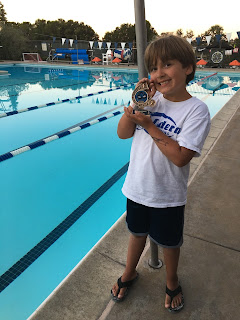 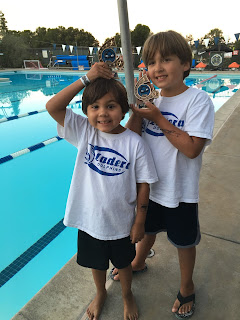 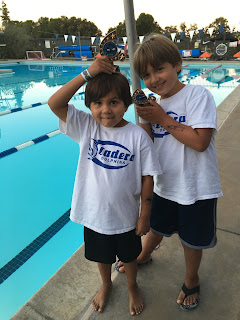