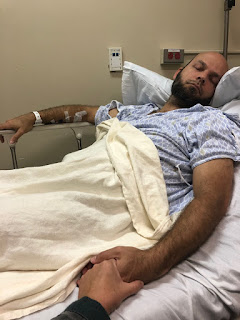 I'm pretty sure I can drive to the ER with my eyes closed by now. ;-)

Early Monday morning (~3am), Jon woke to severe abdominal pains. He tried a few things, hoping they'd go away, but by about 6:30am, we were calling the urgent care. They said to get to the ER. :(

So, I saw Logan off at his bus stop, packed up Callum's things, and the three of us loaded up in the car and headed to the ER. I told Jon the silver lining was Callum was so used to the hospital and ER, he wasn't upset or nervous about his Dad at all, but instead just took it all in stride, talking about how he's been to this ER many times before and settled into the room chair with his legs crossed and iPad blaring. It actually took the edge off to know he was quite content (since, had it been Logan with us, I would've had two quite anxious and nervous patients to deal with!).

After we spoke to the attending, and she guessed we'd probably be there for 3-4 hours, I then arranged to have the mom of one of Callum's friends, who works around the corner from the hospital, to come get him and take him to school for me. Thank goodness for such a supportive and available network of friends we have!!

Jon had blood work and an ultra sound done, and a handful of specialists came to visit. The drs ruled out bad stuff like appendicitis, pancreatitis and an infection. What they suspected was a stomach ulcer - and began treating him for one. They also decided to admit him for the night to get his (horrible) pain under control.

12 hours after we arrived, he was finally settling into his room for the night, so I headed home myself (my Dad had picked up the kids from school and they were all hanging out at home, waiting for me to get home myself). I know Jon was exhausted from such a long day (and night), but I ended up feeling pretty pooped myself! While a lot of the hospital seems like a second home to me, there are still elements of it that really put me on edge and tire me out, no matter how many times we've been.

Luckily, Jon improved dramatically over night (yay!!). So, he was discharged on Tuesday, with strict instruction to religiously keep up with his med schedule (mostly antacids), and try to rest as much as possible. He stayed in bed most of the day Tuesday and lounged around, for the most part, on Wednesday too. He returned to work on Thursday but took it easy and came home early (so glad he did) and then had a more "regular", but still somewhat mellow, day at work today.

His stomach is still restless but he's not in the excruciating pain he was in before. We have a follow up appointment set next week to see his GI doctor, so we can put together a more long term plan. In the meantime, still just trying to take it as easy as possible, continue with the meds, and eat as mild and bland food as possible!! That said, with Thanksgiving in a few days, I have a feeling I'm going to have to be the witchy wife and constantly remind him not to eat all the yummy fatty creamy foods that he'll want to snack on. Wish us luck!!
Posted by Mama Bree at 9:58 PM