"Logan! Our stockings are filled!!" 🤙🏼🎄🤫😍 The excitement in his voice was music to my ears. Particularly given the "exciting" night we had last night.

Jon had fallen asleep before the kids. I was doing all I could to keep awake myself but set an alarm just to be safe.

Then about 20 minutes after I put the boys to bed, Logan moaned out to us that he wasn't feeling well... we had him sit in the bathroom for awhile, but that didn't help. It sounded like indigestion by the way he was describing things, so I gave him a Pepto Bismol tablet and some water and told him to just try and relax and sleep.

Maybe 5 minutes later, he was throwing up all over the side of his bed, poor guy. We didn't get him to the bathroom fast enough and he threw up again all over the floor on the way there.

So the next hour was spent showering him down, cleaning the floors, moving Callum - who was dead to the world - to our bed so we could strip and clean the bed (housecleaning arrived to help me thank goodness), starting up a load of laundry and then finally moving Callum back to their bed.

Jon laid with Logan for awhile until he was calm and relaxed enough to finally fall asleep - meanwhile I was sneaking around filling stockings and laying them out on the table for the boys to find in the morning. In some ways, it was lucky Logan was feeling so crummy, since he didn't notice me doing a thing. 😎

Logan seems to be feeling much better this morning and in a great mood. We're hoping it was just something he ate for dinner that disagreed with him (since Jon and I both felt pretty bloated and a little "off" after dinner too).

Crossing our fingers that's all it was anyway! 🤞🏼 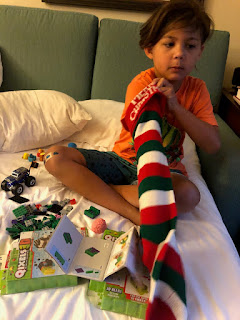 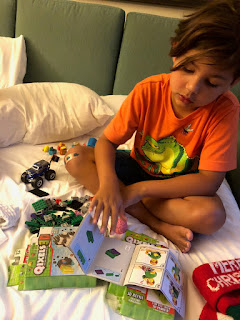