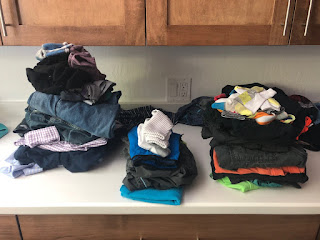 I resurrected the boys' chore charts last week because the minute school ended, they got sucked into their iPads way too much for my liking. 😕

So, I figured getting them to do a few chores per week would be a good habit to get back into (I had totally, embarrassingly, let it slide during the school year!).

Each week, they pick which chores they'll do and then rotate week after week. If they finish all of their chores for the day, they've "earned" some time on the iPad. I really just want them to pitch in more and see what it's like to keep the house running - but sometimes you need a little extra motivation behind these things, so iPad time it was. ;-)

This week, one of the chores Logan picked, was taking the clothes out from the dryer and folding them (to be put away by each owner, something I do *endlessly* each day, each week).

Earlier this week, he wanted to jump on his iPad and I reminded him he needed to get his chores done first. He was already in a pretty pissy mood since it had been a long hot tiring day at tennis camp, where he had hurt his ankle. So, I was pressing my luck. But, I stuck to my guns, and instead of offering some TLC or downtime, I told him he needed to get everything done.

So, he proceeded to STOMP around the house, grumpy and pissy, slamming doors left and right. And then, shut himself in the laundry room, to work on the laundry. I stood outside of the room, listening to him moan and groan, and asked if he'd like some help, or like me to show him how to fold the clothes, because neither of the boys had ever done this chore before. He growled from behind the closed door that he was FINE and could DO IT ON HIS OWN.

I left him to continue stomping around and before long (because, let's be real, the kids have a big whopping FOUR chores to do each week, and one of those is a standing "read for XX minutes", so truly this chore chart is quite light) he was done.

A few quiet minutes passed and suddenly, Logan appeared in the kitchen where I was standing, arm extended out to me, with a dollar bill in his hand.

Mom, this is for you.

For all that you do. These chores are so hard. I don't know how you do them all, all the time. Thank you.


Boy, did my heart melt! Putting up with all that stomping grumpy attitude felt worth it. And I thought to myself, VICTORY. It's finally sinking in!!

Later that night, after Jon got home from work, I had Logan tell him what he had done/given me.

At which point, Jon replied, "A dollar, huh?"