I thought I was being clever and proactive, starting this post the day before I left for my conference.  I thought hey!  I'll be kid free!  I will have all sorts of time to update my blog!

My hotel was VERY VERY far away and the conference started VERY VERY early every morning and my team hung out VERY VERY late at night.  So, no blogging for me.  :-P

That said, I did want to update you guys on how Callum's changed over this last month, because, if you haven't noticed, he's now 15 months old and a crazy bucking tantrum-throwing sunshiny-smiling running and terrorizing LOUD toddler! 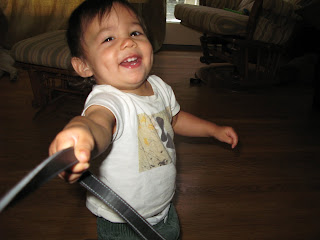 Callum babbles a ton.  He loves to talk - but look at his family, starting with his brother.  So, I suppose it's not a surprise.  He's not picking up words as fast as we'd like (but then I have to remind myself, C'MON, he's FIFTEEN MONTHS!) so you know, he's doing all right.  ;-)  For the most part, I think this is his current repertoire of words: Dog, Hi, Bye-bye, [All] Done, Night Night, Bubbles, Dada, Ju(ice).

I've noted before that this month has been big with Callum wanting to eat his food on his own, using utensils (WHAT a mess folks).  And, he enjoys sitting on his potty (still with his clothes/diapers on, but how exciting!). 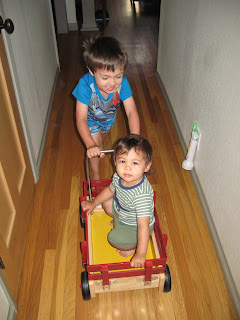 He's walking like a maniac.  Unless he's chillin' in the stroller when he's out with Dad for a jog or a walk with Mom, he wants to be up, out and exploring on his own.  Don't tie this little dude down!  He also LOVES to throw tantrums, arching his back and kicking his arms and legs with all his might.  And he is VERY strong!  I can't tell you how many times he's tried lunging out of my arms, attempting a deep dive to the floor to either get away from me, or continue screaming on the floor.  He lashes out so wildly that he's actually bucked his face BLAM straight into my mouth/teeth, which then gets him screaming for an entirely different reason.  What a mess - I can't wait for this phase to be done with.

We're still having some trouble getting him to sleep through the night.  He was starting to improve and sleeping through MOST nights of the week a few weeks ago (thank goodness since Jon was traveling so much!).  But, then he started having some terrible constipation which led to terrible soreness around his butt which led to his terrible skin infection, so I feel like we're back at square one again, with regard to getting him to sleep through the night.  *sigh*  However, he has been known to surprise us (it's rare, but it happens!) and sleep through the night and very late into the morning.  I think it's his way of helping us not completely topple over with exhaustion. 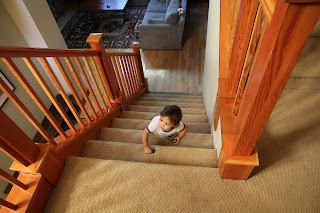 While Callum's attention span still isn't that long, he's really loving books right now - he'll go pick one out on the shelf and bring it to me, sitting in my lap (for a few minutes) while he points to the pictures and we talk (or sometimes read) about the book.  It's adorable!  Our little guy is serious, calm and observant but also very happy, all at the same time! 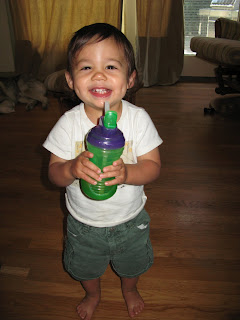