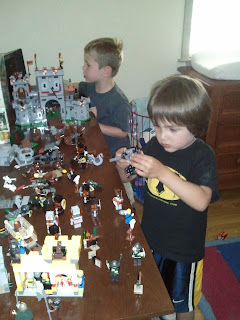 Logan asked if he could see Robert, but he was very insistent that Robert come visit him at his house instead of going to Robert's house. I'm not sure why exactly but Logan was very excited to show Robert all of his tiny Legos, and have Robert sleep on the top bunk in his room (because, he said, Robert likes the top bunk better), so I'm guessing it was one of those two reasons.

We had a nice evening with the four boys playing to their heart's content. Once the boys were down to sleep, Jenn and I caught up on life and Jon and Jarrod played a friendly game of poker with a few other guys who dropped by.
Posted by Mama Bree at 4:17 PM