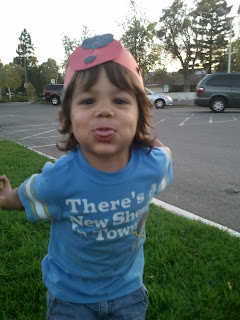 Callum has also been a real punk lately. Partly due to the cold and ear infection he's battling, but we think it's also just the age. He falls apart at any little thing, twice yesterday he had major meltdowns at the school, where I considered leaving him outside the classroom door with a "free" sign taped to his shirt. ;-)

When he's not throwing a tantrum, he's often times telling us no, generally while smiling and sticking his tongue out, to see what exactly he can get away with. He may look cute here but don't let his looks fool you. It's exhausting as all get out and I can't wait to move past this stage. ;-)
Posted by Mama Bree at 10:57 AM