Jon and I have been talking about getting another dog to give Grover a younger playmate (Odin is getting more and more grumpy, as he gets older) and because we're nuts we just love having the furry kids around.

We wanted to get another German Shorthaired Pointer (GSP) because we loved Lola to pieces and the breed in general.  But, we weren't up for taking in another puppy at this stage, so we started contacting nearby GSP rescue groups to find an older, but suitable fit.

We ran into a lot of frustrating roadblocks - our local GSP rescue group has a policy about not adopting out to families with children under 6.  While we understood why, we felt like exceptions should sometimes be warranted and were miffed with the rule (which they wouldn't bend for us).  So, we contacted other rescue groups in CA, all of whom said they wouldn't adopt out to us because we needed to work with our local rescue group.  *sigh*  We even contacted a few rescue groups out of state (!!) but those weren't willing to adopt out of state (understandable, but we gave it a shot).

Our local rescue group said we should look at shelters, because sometimes they'll find a GSP which a rescue group doesn't have room for.... it's very rare, but can happen.  We were starting to think we may have to contact a few breeders and look at finding a puppy instead, since our original idea of a slightly older pup wasn't going to work out.

For whatever strange reason last week, I decided to refresh the "shelter" page of the local rescue group's site, just for the heck of it.

Lo and behold, they had a posting, literally brand new from that very day!  The description was brief, but seemed to be exactly what we were looking for: a GSP, under the age of 5 (they estimated 1.5 years old), good with other dogs and cats, and in need of a good home ASAP.  Jon gave them a call right away and left a message (I had been reading that with shelters, you really need to act fast, not because dogs are adopted out, but sadly, because they are usually put down pretty quickly).

This little guy was found "at large" running loose for at least a week, by the local animal control in Clearlake (about a 3 hours drive from us).  The shelter called Jon the next morning and left a message with a bit more info.  That night, after doing a little more research, I found the City of Clearlake Animal Control actually had a pretty active Facebook page, so I posted a few questions to see if I could find out anything more about this little guy.

I ended up friending the woman (Officer Frankie) who manages their Facebook page, exchanging several questions and answers late Friday night.  Because the drive was significant, I wanted to be sure that this little guy was right for us - and I was mostly concerned with how he'd be around our other (male) dogs.  Frankie said he had been great so far but hadn't had a chance to test him with bigger male dogs.  She offered to test him out that next day, Saturday, so that if we wanted to come up Sunday (when the shelter was closed and on her day off!), we could.

We waited Saturday to hear the verdict - sure enough, she said he was really mellow with the other dog (who showed signs of aggression).  So, Jon and I decided we'd make the trip on Sunday to meet the little guy.  Unfortunately, Frankie wasn't able to meet us until noon that day (we were hoping to drive up early in the morning), which meant that only one of us could go (since Logan had a football game that afternoon).  I was very nervous about driving up and making the decision alone, but bit the bullet and did it anyway.

Callum made the day trek up with me.  We drove through the middle of nowhere - the drive was uneventful and slightly boring (since my co-pilot basically slept the whole way).  ;-) 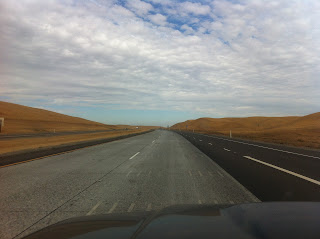 Frankie texted me a pic, at some point on the drive, with a cute note that said: "Waiting to meet you"  :) 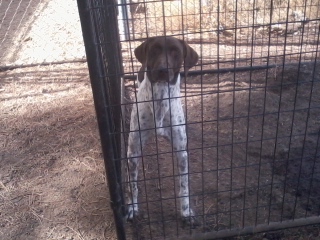 When we got to the shelter, it was an automatic pass with Callum (one of the other interactions I was interested in testing out).  Callum went straight to the fence, talking loudly, pointing and grabbing at the dog and basically being a rambunctious 2 year old.  The pup didn't blink an eye.  And, when Frankie took him out of the kennel so I could meet him in person, he immediately nuzzled up against me, again totally not bothered one bit by Callum who was now patting him and tugging on his ears non-stop.  And, when we opened the back of the truck (where I had set up a crate since I wasn't sure how he'd do in the car), he immediately hopped right in, sniffed a bit, turned a few circles, and curled up right at home.

It was a match made in heaven.

Callum and I were very excited about our new doggie and couldn't wait to get back home to introduce him to everyone else.  On the drive home, I texted Jon several ideas for names (there wasn't much else I could do!).  Every name I thought of didn't really seem to stick with Jon, but the one that did for me was Tobey.  Jon preferred Tobias (which is what Tobey is usually short for), so we decided to name him Tobias, but call him Tobey, for short.  ;-)

Once we got home, we spent about 30-45 minutes out in the front yard introducing Tobey to Odin and Grover, one by one, letting the dogs sniff and get to know each other.  Tobey was super chill with both.  Grover was immediately interested in playing (but Tobey was still a little reserved and kept close to Jon and I).  Odin's first reaction was to growl and snap at Tobey (for no reason other than Tobey didn't immediately cower to him), but we nipped that in the bud and they've been fine ever since.


We kept a close eye on everyone the first few days Tobey was home - just to make sure everyone was getting along.  But, now, just shy of a week later, it's pretty clear that each of the dogs has accepted each other and everyone seems to be getting along just fine.  The kids love him as well - and he's very patient and loving with them (and us).

The past week has been really productive for us all.  Tobey is fantastic on leash, so we've been doing several walks a day with him and the other dogs.  It's clear he hasn't had any past training, so we're starting from scratch - but he's a fast learner, already picking up on "sit" and using the doggy door.

He was roughly 15-20 lbs underweight (we don't know about his past but it doesn't look like he was treated very well), so we've been feeding him extra to bulk him up.  We have also now taken care of his vaccines, neutering, teeth cleaning, bathing, and a biopsy of a tumor the vet found (which is benign, phew!).  He hasn't taken to the cone too well, but who can blame him! ;-)

It's amazing how quickly he has just melted into our home like he's been here for ages.  I can't help but think we majorly lucked out in rescuing such a gorgeous mellow loveable dog.  I am certain he is meant to be a part of our family and can't wait to see how he develops and grows over the years!
Posted by Mama Bree at 10:24 PM