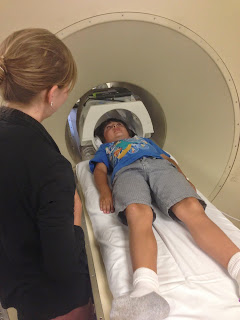 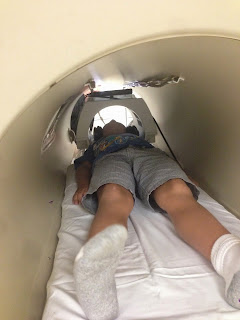 This time, with Logan!

A friend of mine (thanks Angela!!) mentioned this study that Stanford is doing, on obesity - and whether there are any early signs in children, of eating habits that will influence your brain (or, the brain molding your eating habits). They're just starting the study so we are one of 30 kids participating to get the team's approval to launch into a bigger study - but essentially they will study Logan's brain scans via an MRI, watching activity while he sips water vs a chocolate shake. :)

Yesterday we went for our trial run - so that he could answer a few questions with the psychologist and see what an MRI machine is like. It was just a simulator but I was glad they did it since Logan needs to be talked to and prepped about things like this, vs just surprising him and winging it. ;-)

He did really well! He did get impatient and kept asking when they'd be done (after an 8 minute "mock" scan) so I was worried he wouldn't be interested in coming back for the actual test. But when I asked him on the drive home if he wanted to still do it, he said yes. But only after he practices (lying still) at home first. ;-)

(They're giving him $100 to do this study, plus all of the images of his brain, so don't think my kid is only interested in participating out of the goodness of his heart!) ;-)
Posted by Mama Bree at 12:42 PM

Wow, how cool that he got picked as one of only 30! I was worried that there would be too much demand when I saw it on the news and in newspapers.

I know! I was surprised too. There's a waiting list of about 80 other kids apparently. I suspect our situation got us bumped to the top. ;-) The study is small because it's just the pilot right now - then they'll present to get approvals for a larger study - but even then, she said it was probably only going to be like 150 kids...!