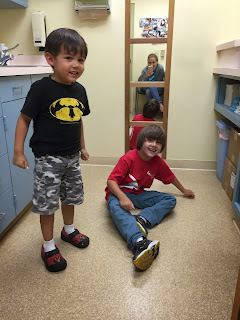 It's flu season! One of the worst things that can happen to us these next couple of months, is for Callum to come down with the flu. It's extremely dangerous and would require immediate hospitalization. SCARY. :(

So, while most vaccines have been put on hold right now, the flu shot is an exception! Our doctors have asked that all of us (including Callum) get the flu shot, along with anyone else who sees him regularly (like my parents). We can't get the nasal spray since that contains the live virus (Callum can't be around anyone who's gotten it, which makes me very nervous since there's only so much I can control - or ask parents to do or inform me of - when he's at school), so shots all around it is!

I decided to schedule our appointment as soon as I could, to help give us a jump start on the season. So we three went in today for ours (our pediatrician gives the shot to parents too, if we'd like).

This pic was taken moments before our shots - they were rambunctious and happy and excited - a handful as we waited for Dr. Safir to arrive to the room.

I went first so the boys could watch. I thought that would help. But I really don't know if it did or not. We had agreed Logan would go next, but the minute I was done and we turned to him to tell him it was his turn, he FLIPPED OUT. He had a death grip on his chair so that I had to PEEL him off and out of it - he then started kicking and screaming and thrashing - it took BOTH Safir and I to literally hold him down tight, to get the shot in. It was a disaster.

On top of that, Callum witnessed it all, so then HE freaked out, bawling like crazy and saying he didn't want a shot. He didn't fight nearly as hard but he was scared to death (can't say I blame him given how crazy Logan reacted). :(

Of course, neither felt a thing since they were so upset during the actual shots - which I pointed out afterward and they both sorta laughed and said Huh, oh yeah. *sigh*

But still, it was the craziest, most terrible, experience we've had to date!!

(Which is especially nuts given all we've been through and how much BOTH boys have braved these last 6 months!!)
Posted by Mama Bree at 5:24 PM