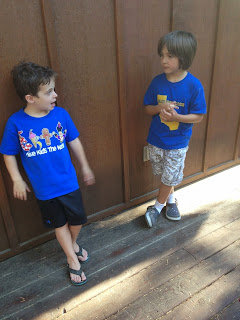 After breakfast at camp each morning, we'd drop the boys off at the "kid camp" and then Jon and I would join a bunch of other parents for a parent discussion group. It was heavy and emotional, hearing everyone's stories and being reminded of all the pain we had in the beginning that we had worked through.

However, it was also amazing and helpful, hearing lessons learned from parents who are further along in their treatments (or done!) and tucking those tips and advice away in my memory to use later on. Many of the families don't live near us - either in the Sacramento or East Bay Area, but there are a few parents that I may reach out to later, to see if we can connect on some level. At the very least, it might be nice to try and coordinate getting together on the same weekend of family camp next year. :)

On Saturday, Logan really wanted to stay with Callum - so we checked them both into the 0-5 year old group. We told him (and the counselors), that if he got bored and wanted to play with older kids to just move upstairs to be with the 6-8 year olds. He didn't move and ended up having a really nice time. He told us he made a friend, but couldn't remember his name, and was excited to play with him again later.

Yesterday, we suggested Logan try out the older group, since he had been begging us to play a number of board games - and we thought being with the older group would expose him to kids who would want to play and do things with him, at his level. He wasn't crazy about the idea but he did go to the older camp, and had a great time. He did miss his new friend from Saturday, however. So I told him to point the kid out to me the next time he saw him around camp so we could meet.

Last night, we decided to pack up a bit early and get home to beat some of the traffic. As we packed, I told the boys to play out on the deck - which we shared with another cabin next to us. All of a sudden I heard Logan yelling to me - Mom!! Mom!! This is the friend I told you about!! HE LIVES NEXT DOOR.

And so he did. :) Pretty funny that we didn't discover it until the night we were leaving... I told the mom that we'll definitely need to keep in touch since the boys were such fast friends.

One of the conversations I overheard between the three boys was quite touching - and I really wanted to share.

Callum said to the new friend: Do you know why I can't go to school?

Logan chimed in: Yeah. He has cancer.

So the new friend says: Well I have cancer.

And Logan, looked surprised, back at him: You do? Whoa.

That 30 second exchange completely validated, for me, why we went to the camp at all. The camp is really meant to help kids with cancer feel "normal" and understand they aren't alone. And help siblings also connect with, not only their sibling, but other kids in similar situations.

I knew after our (really amazing) stay, that we'd have to return next year. But if there was any doubt, that conversation sealed the deal for me. :)
Posted by Mama Bree at 3:03 PM