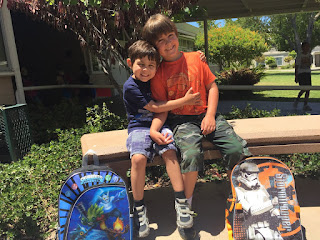 Today was the boys' first day of summer school, at their new school that they'll be attending in the Fall. I wasn't super thrilled to send them to an academically focused program over the summer, but I thought it would help them get acquainted with the school, the teachers, and make friends, before the overwhelming start of the school year in the Fall.

Logan was a little suspicious this morning as he interrogated me while we were getting ready. Will there be games and sports? Well, not exactly, but there will be activities. Will there by field trips? No. Will I know anyone there? No, you'll have to make new friends.

This sounds like school, not camp. I want to go to summer camp.

And it went on and on, all the way up, during our 45 minute drive through traffic (ugh).

Drop off is done in the playground where the kids line up with their assigned classroom/teacher and then head to class. Logan was not having that. I tried to get him to join and follow as his class marched off but he fell behind and then lost them (and then got even more upset).

So I told him to stay put with me, we'd go with Callum to drop him off first and then I'd go with him to his class next. As we were walking along the corridors, Logan stomped around in a really pissy mood exclaiming "This is so confusing! There are so many halls and so many doors!!" :)

I reminded him that we found the first day of Kindergarten confusing too but eventually figured it all out and he'd learn quickly at this new school too.

He continued to stomp with a scowl on his face.

Callum was actually much more excited about this new school - but when we dropped him off to his classroom, with one of the kids bawling his eyes out, afraid of leaving his Mommy, it registered for Callum that maybe he should be upset too.

So he suddenly clinged to my legs and wouldn't let go and started getting upset himself.

After several minutes of me trying to coax him to join the circle with his new classmates, I somehow pulled away and quickly backed out of the room. I felt so awful leaving him on his own. You'd think I'd be a master at this, after going through this sort of thing many times in the past. But no, it's still hard and it makes you feel awful to leave your child so upset, clawing at you to hold on and not let you go. :(

Next Logan and I headed to his class. We peeked in and could see they had already started with their circle time (and introductions). He stopped dead in his tracks and said Nope, I'm not going in. What?!? They've already started. I'm late. I can't go.

How about I go in with you?

This continued for a few more minutes before I finally lost my patience and said get in there now. :/

I went in with him and we sat down toward the back. They were still doing their round of introductions and what, or where, people would be visiting this summer.

Mom, I don't know where I'll be going this summer, he whispered to me.

I reminded him, aren't we going to go to Hawaii?

Oh yeah! He brightened with a smile.

I stayed a little bit longer until I saw a few more smiles and could tell he was finally starting to relax. I slipped out after he no longer insisted I stay. I still felt bad leaving him as well, knowing he really didn't want to be there. But also knew he'd eventually (I hoped) have a good day.

When I picked them up a few hours later, they were both excited and happy! And both had the same news to report.