The week of medals! 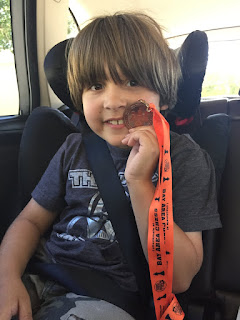 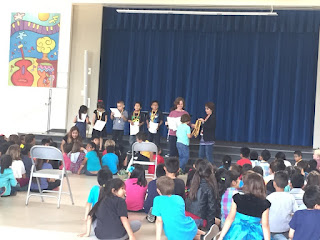 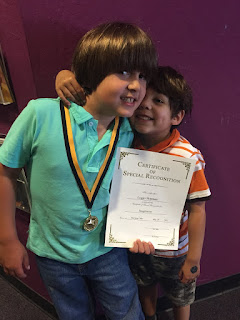 Last week I was pretty sick (which, sadly, mean Callum is also battling a cold), and Jon was traveling (I think I'm always sick when he's traveling), so it was all I could do to (barely) get Logan to school (you're good with another hot lunch today, right kid?!) :)

But, it was a great week for him, since he was awarded two different medals. The first was from his chess club, where they had an end of year test and he got all challenges correct (even over the 5th grader, he reminded me).

The next was at his school's end of year awards assembly, where he was awarded a medal for "Best Imagination" in his class. Quite quite appropriate, I must say. ;-)

Callum and I were seated pretty far away, in the back of the assembly room, but I was able to get a pretty cute pic of them together later after school ended. :)

Yay to Logan!! We're pretty proud of you kiddo.
Posted by Mama Bree at 3:47 PM