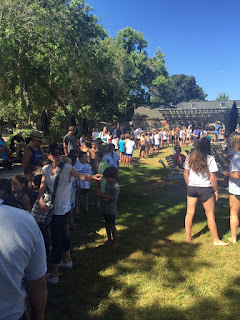 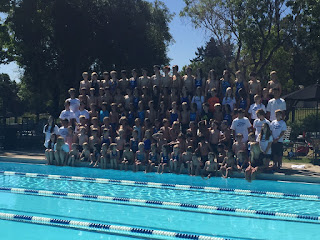 This morning was pure madness - the first pic shows us trying to line up the entire swim team by height, trying to get these kids organized (and to wait/stay in line when they really didn't want to) so they could march up onto the bleachers for the team pic.

The second pic shows the boys' swim team - it's big!! And impressive. We won our first meet on Thursday - I know it's because we have a lot of strong swimmers of course, but I think it's also because we just have a lot of swimmers, period! ;-)

While I appreciated the photographer's attention to detail and wanting to get the perfect picture of the team - this pic took FOR-EV-ARRRRR. And the kids were just melting in the sun - their patience and stillness melting away too!

THEN. Because, I guess, we're in the Silicon Valley - one of the parents who's in charge of the end of season slide show/video, decided to video the kids doing a few claps, chants, and moves - all choreographed to music, while he taped it with his drone flying overhead. It was a little insane, and felt over the top. Yet I can also tell it'll probably be really fun and cool to watch at the end of the season. :)

After the team pic, we then had to wait in another excruciatingly long line for individual pics. It was quite the process, made for a long and dull morning, and my boys were more than done after. :)

But! I can't wait to see what they look like!! I guess you could say I'm a proud swim team mama.
Posted by Mama Bree at 12:50 AM