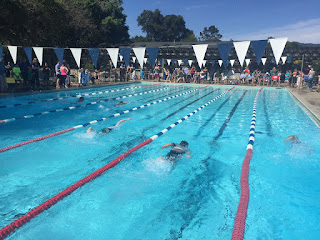 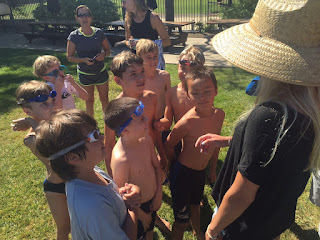 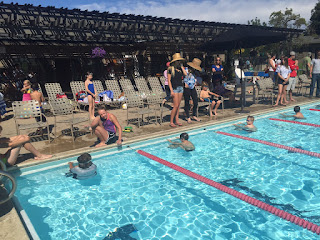 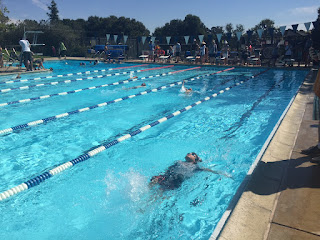 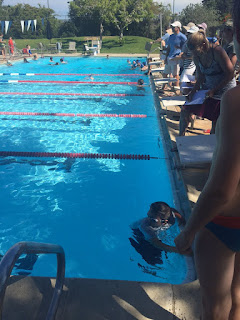 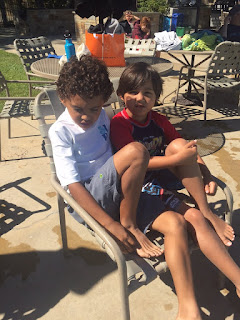 Logan asked to join the swim team (of our local rec center) this summer - I was impressed he wanted to give it a shot since he's not yet a strong swimmer (yet he's ultra competitive - so he doesn't like to lose). So we talked about that, and he told me he knows he may not win, but he still wants to give it a try. Yes!!

I figure the experience is going to be great and the practices alone will be awesome for beefing up their swimming abilities. Luckily the neighborhood team is pretty relaxed - so even if the kids just go to practice but never compete in a meet, it's totally ok. :)

Anyway, next week starts the season and this weekend were time trials. The rec center was super packed and as all swim meets, quite chaotic. And, intimidating for the boys with so many kids warming up together in a single lane. Callum swam about half or a full lane and then got out and told me he was done. Logan wouldn't swim any laps during warm up - he was too nervous and shy. (Both reactions I totally understood and expected)

6 and unders (Callum's grouping) started off first. One lap of freestyle. I got him as far as standing in line behind the blocks but as he watched the other kids (some very good) diving in and swimming - it was all too much for him. He gave me a big fat NOPE.

Meanwhile, Logan's group, the 7-8 year olds, we're getting ready next. He was nervous but still game to give it a try. So I had Callum just sit in a nearby chair to watch and coached Logan through it instead. He thought he'd give jumping off the block a try but the minute he climbed up he said no way :) and decided to jump from the edge of the pool instead (which they totally allowed).

So, first pic is him in the 2nd lane from the right swimming his 25 free! He hung in there and did great. The timekeepers at the other end told him he swam it really well and that really boosted his confidence. :)

After a few minutes of waiting, it was time for the 25 backstroke heats. I took a few more pics of him in this one since I was standing poolside next to his lane. There were two teenagers, you can see them kneeling down and talking to him while he's in the pool getting ready, who were coaching him and showing him how to kick off the wall (he's never done any of this before). It was so wonderful and I'm super grateful for those two kids. They walked along the side cheering him on the entire way! (He was huffing and puffing and very last but it didn't matter)

I was bummed Callum didn't want to give it a try because he loves the pool so much - but I'm not even sure he would've made the full lap so maybe it's for the best. :) He did love the social aspect of it, hanging out with friends and snacking all morning, which is the other part of this that I'm glad about.

Tomorrow are the breast and butterfly trials. Logan told me after he got out from back, that he'd like to come watch (it's more of the older kids, given the strokes), but doesn't want to swim the breast (he's just started learning it but probably would have a tough time making it across). I said that would be great - so we may try to make it back tomorrow morning too. We'll see how it goes!
Posted by Mama Bree at 11:22 AM