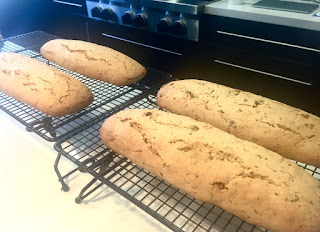 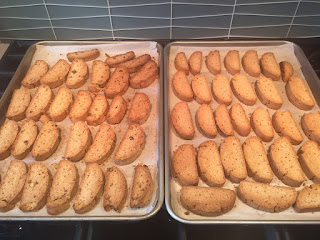 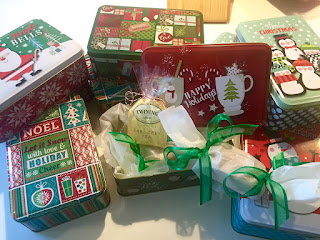 I feel like I've been barely keeping my head above water lately. And then Callum went and broke his wrist and that threw us off our game in all sorts of ways!

So, I remembered a little late this week, that I had committed to going to Jenn's annual cookie exchange this weekend, yet hadn't even prepared for it! Whoops!

I had wanted to give biscotti a try this year since I was tired of always finding recipes that felt like close duplicates to recipes past. But I was a little unsure on how it would all work out (so I had a backup recipe ready on hand just in case!!) :)

I also wanted to do something different, flavor wise, since most everyone sticks with the traditional chocolates, peanut butter and caramels.

I chose a traditional Italian Anise Biscotti, but then thought I'd love to add some pistachios to it too....so I added the nuts to half my batch to mix things up.

They turned out great, if I do say so myself!! And what's more, they were incredibly easy to make! So, I may be doing more biscotti in my future. Heehee!

I had bought a bunch of Christmas-y tins to package them in, but since I did half with nuts I decided I better wrap them separate just in case. So, I've got two little bundles in each tin box, with and without nuts. I also decided to add a couple of Earl Grey tea packets as well, since I think these would go great with a hot beverage. And, I'll probably add a quick little recipe label on the inside of the lids, if I have time tomorrow morning. But for now, I'm basking in the glory, of being done waaaaay earlier than I ever am for these things. Ha!!!
Posted by Mama Bree at 7:53 PM