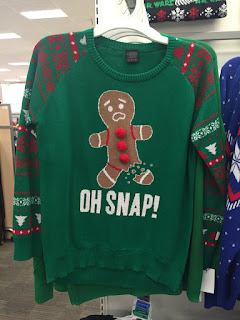 I did a little retail therapy today, to help lift my heavy heart. 💔 And found this perfect sweater for Callum.... 😏🎄💪🏼

Yesterday was Election Day, where we voted for the next president of the United States. And after a very close race (which surprised me!), Trump won.

It has been pretty hard for me to digest (let alone accept) the news. But that is sort of expected when you're not the supporter of the winning team right?

What I wasn't as prepared for, however, was this morning with the boys.

As is their usual routine every morning, the boys woke up, got dressed and then turned on the TV. The first thing they saw plastered all over their YouTube page, were highlights of "Trump wins the US Presidency". Alarmed and upset, Logan immediately ran to our room to tell me the news (I had set expectations last night with them that it was looking like Trump would win, but that we wouldn't know until morning).

He asked "How could this happen Mom?"

It was the first time throughout all of this, that I almost broke into tears. Because the innocence and alarm and fragility of my son, all wrapped up in a few minutes of conversation, really struck a chord with me.

I did my best to explain why I thought Trump won. One of his friends' mother apparently voted for Trump and he didn't understand why (because he feels Trump says and thinks mean things). So we talked about some of the reasons someone might vote for Trump. And how sometimes, even if they don't like the candidate, they might still choose to vote for him, for other reasons. We talked about the different parties, and their beliefs/platforms (in a very broad stroke), and differing opinions and priorities for people.

In the end, Logan seemed a little less upset as he processed everything we talked about. He asked, how long can Trump be president? And when we talked about that - he seemed to relaxed a little.

I have to admire his optimism, even if I don't always share it myself. ❤️
Posted by Mama Bree at 12:12 AM

This brings tears and breaks my heart. Stella and Luke asked if their Nana was going to be sent back to Mexico. Ms Clinton's commercial with the children hearing Trump's racist and sexist remarks have hit our grandchildren hard. It pains me to know that Jonathan's oldest brother actually supports Trump and his beliefs. ��