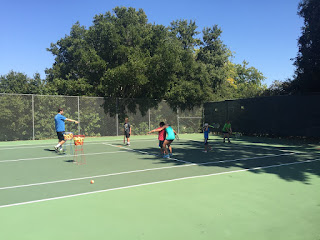 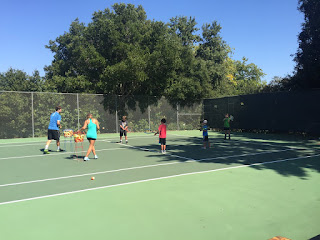 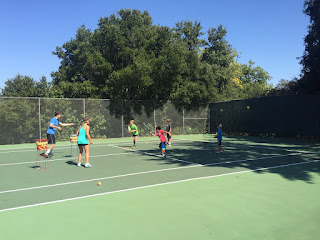 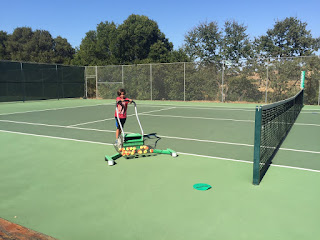 I decided to sign the boys up for a tennis (group) lesson today at our neighborhood Rec center. They aren't interested in football or rugby, much to Jon's chagrin. And they've lost interested in soccer and basketball, sadly. So, I thought we'd try out an "individual" sport this time, since I'm beginning to think part of the issue is, they just aren't into the regular ol' fashioned team sports.

(Keep in mind, I got an EARFUL from them before the lesson, about how much they did NOT want to try tennis and HOW COULD I sign them up for something else without talking to them first). *sigh*

It was BLAZING hot today, but the boys stuck through and actually were laughing and smiling the entire time. Amazing!! No complaints and they stuck it out. Afterward, they both said they had a great time, and Logan even asked me if he could do more tennis, instead of soccer or basketball. 😱

So, we shall see! I honestly don't care what sport they do, but I *would* like them to do something active, so this would be good. And bonus if it means practicing 2 minutes down the hill. 😎

(I had to throw in the last pic of Callum running around the court with the machine that picks up balls as you roll over them - I'm pretty sure that was his favorite part) LOL
Posted by Mama Bree at 7:47 PM