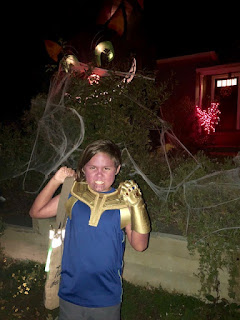 I forgot to blog after our fabulous time out on Halloween night!

Jon, Callum and I walked the neighborhood with a bunch of Callum's friends (and their parents), until he was quite tired and refused to hit any more houses (his friends couldn't understand how he didn't want to get any more candy - ha!!).

Meanwhile, big milestone for us - Logan was off on his own for the night! He, and a couple of his buddies, decided they would trick or treat on their own this year - and, perhaps anywhere else, I might've had a harder time allowing that. But our neighborhood is so great - every single kid (and parent) on the streets, is someone we know, or at the very least, recognize. So, while we had no clue where Logan was most of the night, we'd run into other groups/parents along the way who'd say something like "Hey! We just saw Logan!" :)

Most of the time, Logan has a lot of anxiety around doing things on his own and/or being without us. It was really nice to see him get a bit out of his box that night, and we were really proud of him for it!
Posted by Mama Bree at 8:52 PM