Right when I thought we couldn't be any busier than this summer, Fall rolls around and I have every weekend (and most week days) booked up!  So, I'm going to try and plow through a few updates that I'm terribly behind on, while laid out at home, sick with a cold and icing my back.  Good times!

Did you notice Callum turned 18 months old last month?  Yeah, I barely noticed myself.  The only reminder, frankly, was his 18 month check up we took care of right before heading off to Texas for a few days!

Callum continues to be a rough and tumbling little kid.  He's constantly following his big brother and quickly picking up his (bad) habits, throwing toys on the floor or climbing and getting into things he's not supposed to.  :)  He could care less about the toys lounging around the house that are age-appropriate for an 18 month old, he wants to play with the big kid 4 year old toys! 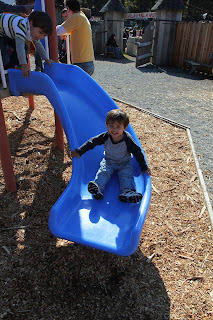 Physically, he's continuing to show signs that yep, he's a boy.  His climbing has definitely improved as he quickly scales walls and tables with a blink of an eye.  He cannot get enough of slides, slides, slides!  He now loves balls - chasing and THROWING them EVERYWHERE with delight.  He also enjoys grabbing one of the dump truck toys we have in the house (it's actually Logan's but I think Callum has claimed dibs) and races it around the house, sometimes filled with toys that he then dumps god knows where elsewhere in the house, always bashing into walls and dogs and your legs along the way.

His conversation skills have also exploded this last month.  I can't always make out the words he's trying to say - but he's constantly babbling (whether you're listening or not) and practicing his vocal abilities.  He's very demanding, but in a polite way ("up please" and "more, thank you") which is pretty hilarious.  Every time we give him something or he points out something nearby that he's interested in, we practice saying the word together and it's just amazing how much he can immediately mimic and say the word back!  I had forgotten how fun (and frustrating) this stage of learning to talk and processing language in general, can be.  Still, very exciting as we get to know Callum and his cute little quirks more and more! :) 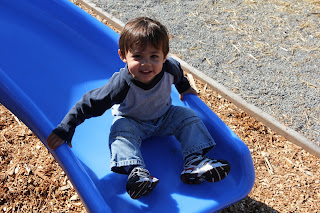