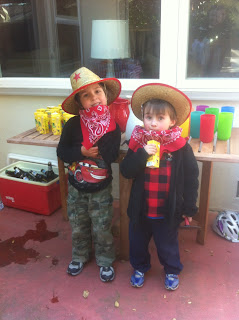 Logan's friend Paul turned 5 recently and invited us and a few other
friends over for his cowboy themed birthday party. This pic is
actually of Logan and his other good friend Jackson...Paul was out
running with the other kids playing "good guy/bad guys" at the time so
I couldn't get them all together.

Paul's family has a nice house with a terrific (and huge) backyard
that they made feel very "campy", renting hay bales covered with
blankets and saddles to sit on, long ropes for the kids to practice
their ropin', and hats and handkerchiefs pictured here. They had one
of those huge playground sets plus a little fort built into one of
their trees which Logan and the other boys were madly in love with. :)

A funny short story about Paul...Logan has known him for many years
since he's gone to the same school as Logan, for probably as long as
we have. The teachers tend to give the kids nicknames, which the kids
sometimes latch onto (Logan was called "Logey" for awhile). So,
similarly, Paul was called (and is still called by most) Paulie.

At some point, a couple of months ago, Paul's name came up. I think
because Logan was telling me to invite him to his birthday party...
And when Jon saw my list, he asked, who's Paul?

Nope, never heard of him.

Logan corrected me and said Daddy, it's *Paulie*!

Jon looked at me and said, Oh, is Paulie a boy?

I looked confused and said yes of course. What did you think?

Apparently all of these years, Jon had assumed Logan had a really good
friend named Polly. A girl. :)
Posted by Mama Bree at 11:16 AM