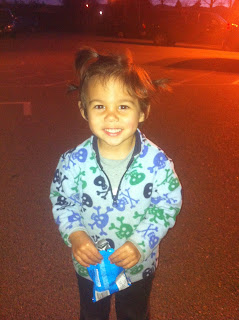 Yesterday I woke up to several Facebook comments on a picture I had
posted a few weeks ago of Callum in a tutu.

An old friend from high school, commented that the best thing I could
do was destroy the picture, but now that I can't take back posting it,
the damage has been done and I will have a lifetime of "tortured
concern about sexuality" as a result.

A few other of my old high school friends (one who is gay by the way)
immediately jumped in and told him he was being ignorant, why would he
post something like that on my wall, get a life, leave all of us
alone, I'm a wonderful loving parent, Callum is clearly just having
fun, there's no proof any of this would ever cause gender confusion or
a sexual identity crisis anyway, blah blah blah. :)

You know how many times you can change someone's opinion of things on
Facebook? Exactly zero.

I deleted the comments and blocked the friend who had made the
"tortured sexuality" comments (I've actually noticed, from his posts
for the last few months, that he's probably not a friend for me, but
since he never had bothered me directly with his extremist views, I
didn't bother unfriending him). Clearly, he doesn't know me or our
family well if he thinks any of that is going to bother me.

So, I thought it was particularly funny, and fitting, that when I
picked Callum up from school yesterday, he had all these crazy little
ponytails in his hair.