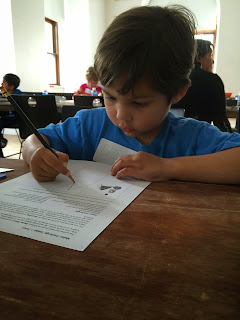 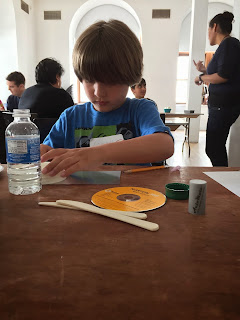 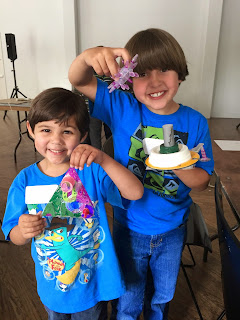 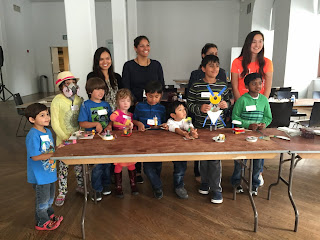 At the Kids & Art event, after our tour, the kids were taken to a classroom where they were given an "art challenge". To make something (anything) out of the recycled "junk" available at the nearby tables. There were things like bottle caps and plastic knives and used CDs to choose from.

They were only allowed to pick 10 items to bring back to their table (and once chosen they couldn't go back to exchange or pick something else out) - and then were told to sketch their ideas out first, before building. :)

The boys loved this part of the event best. They already have such wild imaginations, that it wasn't too difficult for them to think of something they'd like to build, and then build it. I had a little fun and built some odd piece as well - which they both took to and asked if they could play with it alongside their own creations (but of course)!

What was even funnier was how they absorbed this activity so much, that they took to hunting down junk, in and around the playground after school on Monday, continuing to make additional creations and toys to play with. Pretty cool. :)
Posted by Mama Bree at 11:03 PM