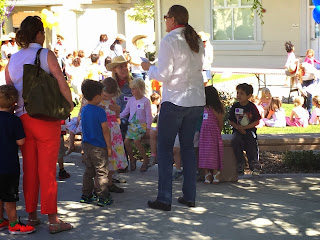 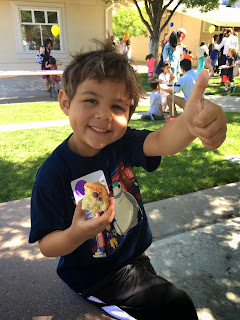 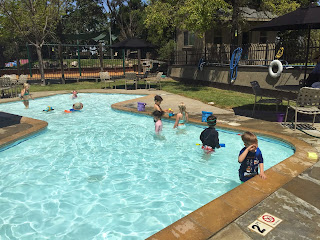 Today was Callum's Kinder Roundup (orientation) at his new school. We had such a great time. He was sooooo excited when we got to the school - he didn't even look back or linger when his group (the purple group) was called to head out on their tour (the kids were taken in groups, to visit the current Kinder classrooms and see the campus while the parents hung back and listened to the PTA schpiel).

After, we met up with several of the new neighborhood families at the neighborhood recreation center where they have a fabulous playground and a couple of pools. It was super hot so the families quickly moved from the playground to the pools - I hadn't planned on us going swimming but one of the moms insisted Callum wear her son's shorts (she had brought a suit for him) so that he could join in the fun. He had a blast, and was upset when I had to tear him away so that we could get back home to pick up Logan from school.

All in all, a fantastic successful day. I think Callum (and Logan) are going to transition in with these kids wonderfully! :)
Posted by Mama Bree at 2:13 PM