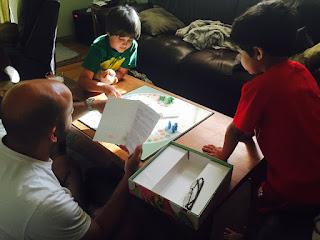 We had another unplanned visit to the ER yesterday. Callum was acting a little off and clingy yesterday morning - complaining of being cold and wanting to be held - it took me a minute to realize he might be getting a fever, but sure enough, I took his temp and he was burning up. :(

So, I packed up our stuff, and he and I headed to the ER. We were there all day - the ER was ridiculously busy for some weird reason. Most of his tests (urinalysis, X-rays, Dr exam) happened out in the hall, outside of the triage area.

One of the back nurses came up to chat with me, recognizing us from previous visits, and finally got us a room to move to. So, after a couple of hours, we were finally able to relax.

Except, not really. Since they hadn't done Callum's blood draw yet. :(

Another nurse, assigned to us, came in to prep for accessing his port. She was a little batty, or maybe just fried from a busy long day, or probably both. But she made me (and Callum) nervous.

These ER visits sure have made us appreciate our own medical team at LPCH a whole lot more!!

With Callum (literally) kicking and screaming at her while she fumbled to try and clean his chest and find the port, she finally stuck him. Only, she wasn't getting a blood return at all. She asked me if his port was angled at all and I said no. But said sometimes his blood return can be a little slow so try to flush it with the saline a bit and then try the return again.

So she pushed a little saline in and Callum immediately started screaming bloody murder. :( I knew something was wrong and I think she did too. She felt his port/needle placement again, pulled it out and stuck him again into the port, at which point she then got an immediate blood return.

I'm pretty sure that means she missed his port. :( She said she didn't buuuuuut I'm not sure why else that happened the way it did.

I was also not happy with her methods of cleaning (read: little to none!) and after seeing she wasn't cleaning the ends of his lines each time, I got on her case about it and asked her to please clean them. :/

Just being in the ER really freaks me out. But then seeing shit like that - it's just a different type of mentality and approach to care (I get it, they're in emergency) - makes my stomach turn. So, all I do is pace, hunt down the nurses or doctors the entire time I'm there for answers, and jump at the first chance we can to get the hell out.

So anyway, all tests were great. His pneumonia from before was gone (no signs in the X-rays) and his blood counts were solid. They gave him some fluids while we waited... As the Tylenol (I gave him at home) from noon-time began to wear off, he started feeling warm to me again. It took roughly an hour to get someone back to the room to take a friggin' temp - sure enough he had another fever. And then it took roughly another hour (with me constantly bugging them) before we got him some Tylenol. It was a madhouse but my requests also seemed pretty easy to me so I was getting more irritable as the clocked ticked on. ;-)

We got home about 8pm last night - made a little dinner for the kids and then I basically passed in and out of sleep on the couch for a couple of hours while we put the kids to bed and settled the house down.

Unfortunately, Callum spiked another fever in the middle of the night. But was good about taking some Tylenol and slipping back to sleep. He was MUCH better this morning, but by the afternoon was warming up again and hit another (mild) fever.

We've been in touch with our on-call oncologist the entire time and are watching him closely. But if he hits another high fever now, we've gotta go back to the ER to run another round of tests again. :(

All of this is to say our 4th was a quiet and lazy day for all. The boys have mostly been watching movies or playing video games. Later in the afternoon we got a fun family board game going which we all enjoyed together. :)

Hope everyone is having a great 4th too!
Posted by Mama Bree at 8:11 PM