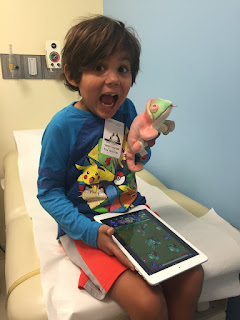 Callum loves it when we run into the toy cart, that makes its rounds throughout the hospital. It has several bins of toys and snacks for kids to choose from (and keep). What kid wouldn't like that?!?

Today, Callum scored a chameleon stuffed animal - which he's wondering if Logan will want to trade his puppy for (answer: highly unlikely!). 😉

We're hanging out waiting for lab results and his nurse to conduct his monthly physical exam. His poke went MUCH better today - it turns out what he hated most about last week's poke/IV in the ER, was the band they tied tightly around his upper arm. I suspect the tight and uncomfortable feeling of throbbing blood in his veins threw him off.

So when the phlebotomist came in, and immediately started wrapping the band around his upper arm, he started to freak out a little bit. He squeezed his eyes really tight and held his breath - waiting for the poke. Meanwhile, she was practically done with drawing a vile of blood and about to pull the needle out and bandage him up. 😊

I told him to open his eyes and look, to see that she was almost done, and he said "Wait - she already poked me?!"