Back in the ER 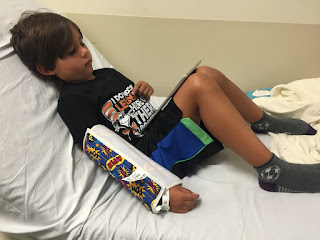 We've all been fighting a bit of a head cold since the weekend. I think we just ran a little too ragged, without enough sleep, prepping for Callum's big party.

Anyway, the boys seemed ok enough to send to school yesterday. But this morning they both looked a little ragged. I kept Logan home, but Callum seemed to perk up in time to make it to school (he starts later than Logan).

So I sent him off on the bus, only to get a call from the school about 45 min later. He had been feeling nauseous from the bus ride to school and the school nurse found he had a slight temp (about 100.3).

So, I picked him up and we all relaxed at home all day. His temp continued to hover just over 100, but nothing else came up.

Then, late in the afternoon, he spiked to 101.8. Even though he's done with chemo, we still need to keep an eye on him/fevers, since he'll remain immunocompromised for a few more months. :(

So, off to the ER we went. Because he no longer has a port, they put in an IV in his arm, and it was like experiencing the traumatizing pokes from those very first days, all over again. He screamed his lungs out the entire time. I'm pretty sure he didn't even feel the actual poke, it was just too scary for him to imagine.

After she was all done with the blood draw, she asked if he was ok to leave the IV as is or if he wanted it covered up? I told her let's cover it, since he got really upset seeing the IV in his hand after his port surgery. So, she pulled out this nifty Velcro cast sorta thing to wrap around his arm, and suddenly he was in a great mood. :)

Jon had stopped by just before the poke, so he was here to help hold Callum down while the whole thing took place. And then took Logan home after Callum seemed ok.

Now, he and I are just hanging out in the ER room, waiting for the lab results to come back, so that we can decide what to do next.
Posted by Mama Bree at 7:22 PM