Daddy is all better now! 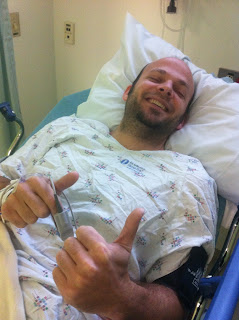 I forgot to post this earlier in the week but it's a fun pic. Jon had hernia surgery Thursday morning, and this was him, still stoned as hell, just after he woke up. ;-)

I'm only a couple of days in and already exasperated with the now one-two-THREE kids I'm taking care of. It's like they're all in sync and start whining and yelling and demanding at the EXACT. SAME. TIME. Oy.

That said, Jon is actually doing really well. He's been walking and doing laps around the house to keep his movement up and helps me where he can. He's still super sore but I'm sure that'll get better soon. I'm just glad it's done and now we can get on with our lives!
Posted by Mama Bree at 10:33 PM