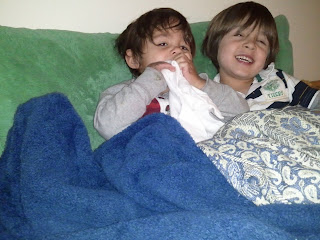 A week or two ago we put the boys down at the Jodoin's house so we could hang out late. Logan got to sleep on the top bunk in Robert's room and loved it. He has been talking about sleeping on his own top bunk since.

This last weekend, we visited the Jodoins again and that solidified Logan's campaign to beg to sleep on his own top bunk.

So, last night we caved in and set him up. He did really well and felt so big boy proud when he woke this morning. :)

Tonight, Callum discovered something new with the ladder in place, and Logan really wanted to show him his new pad. So, they spent some time playing on the top bunk together while I supervised. ;-)  It was actually pretty cute, as they both pulled up the blankets to their chests, sitting together, talking, imagining...doing what they do best.
Posted by Mama Bree at 8:33 PM