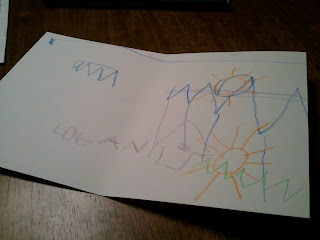 I'd say this is probably the first of Logan's pictures that depicts an actual scene (where others besides Logan know what's going on, that is!).

Can you make out what's going on?

He's drawn a house, with a window and grass beside it. He drew a sun in the sky, as well as one that is setting. Once he drew the one that was setting, he also drew a moon (on top of the sun in the sky).  Finally, he added clouds with raindrops coming down (over the house) and then signed his masterpiece! ;-)