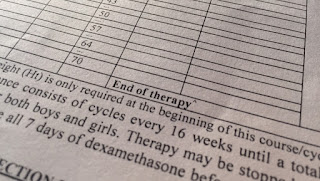 Today was Callum's monthly lab and exam day. All looks great - even though he's battling a minor head cold, his numbers look solid, so we've been bumped back up to 100% of his chemo program. Phew!!

Since we're getting close, we're now starting to talk more about what the end of therapy looks like. We have roughly 4 more months of treatment. After that, Callum will have another bone marrow and LP procedure to ensure, and officially document, that he's in remission and cleared. A few weeks after that he'll have another surgery to have his port removed (which he's both excited, and nervous, about). Crazy times!!
Posted by Mama Bree at 7:53 PM