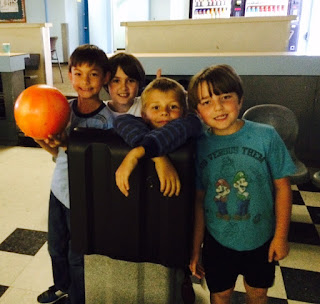 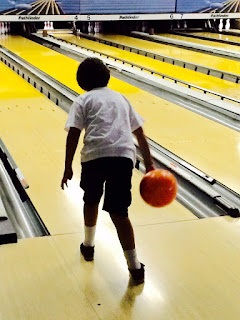 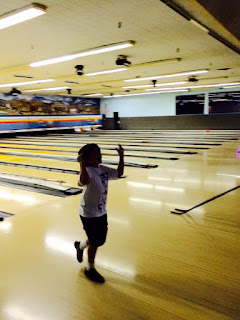 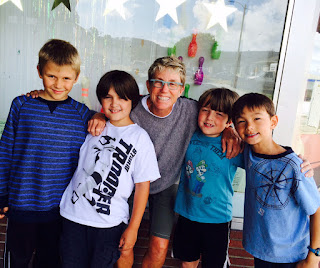 After the trampoline park/birthday party on Saturday, I scooped Callum up and drove back home to drop him off and pick up Logan.

He and I headed BACK up the peninsula, picking up a few of his friends along the way, to meet their PE teacher at a bowling alley for some bowling fun that afternoon!

The school has a huge annual auction fundraiser, where you can bid on tons of fancy things like some one of a kind bottle of wine or safari trip to South Africa. But there are also parties you can buy tickets for, or outings with the teachers, that they've donated and we all, as gullible parents, bid on. :)

I knew Logan would love the idea of bidding on items no matter what. But when I told him his favorite (PE) teacher of all times had a few items that he might be interested in, he suddenly got SUPER into it.

So, we bid on a few things and ended up winning his number one favorite item "Bowling with Ms. Hedges", as well as another item with her, where he gets to be the PE teacher for the day.

As part of the fun, the winning bidder can invite up to 3 of his/her friends along to join. I'm always encouraging Logan to make new friends and was pleased to hear him rattle off three boys names right away, excited as ever to have them join.

Of course, they had a blast and didn't want to go home when it was time for me to pick them up. They were still so amped that the entire car ride home, the 4 boys basically wrestled and giggled the entire time. It was so fun seeing them have such a great time together! :)

After we dropped off the last of the friends, Logan and I then headed down to the South Bay for a BBQ party at a friend's house, that Jon and Callum were already at. I was so beat, but still enjoyed seeing old friends and hanging out for a bit before we had to finally call it a night.