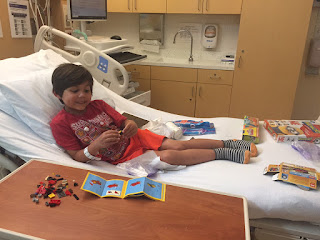 The last few days have been a little stressful but we're doing much better now.

One of Callum's classmates caught chickenpox - but it took a few days to actually diagnose (mostly because the parents didn't see a need to visit a doctor when they were sure he had it, via discussions and pictures shared with an advice nurse on the phone). They noticed a few bumps/rash last Tuesday, but didn't think much about it since their child also has a number of different allergies.

However, on Wednesday, the rash had grown and the lesions were seeping, some crusting, typical to chicken pox. So they kept him home. On Thursday, the rash had spread even more (they kept him home again thank goodness), so the school nurse decided, even though they hadn't seen a doctor to confirm it, that she'd send a "possible" exposure notice out. She also put a call into me.

We talked for awhile, and after, I sent an inquiry into our oncology team to see what their advice was. We were supposed to go to Camp Okizu this weekend (the family cancer camp we go to every year), and I also wasn't sure if there was anything I needed to do, or watch for, with Callum.

Our oncology nurse called us back late Thursday evening to discuss the situation. Since Callum's classmate hadn't been seen by an actual doctor, in person, it made our situation a bit more strange in terms of what to do and how to handle it. If Callum was indeed exposed to chickenpox, then we would need to cancel our trip to Camp Okizu *and* come into the clinic right away, because we would need to give him an immunoglobulin shot for chickenpox.

But not knowing a doctor's diagnosis left us in this gray area. Our oncology team asked that we try to get the family to be seen by a doctor immediately (Ha! Easier said than done), but in the meantime we should probably cancel plans to Camp Okizu to be safe.

What about the immunoglobulin shot for Callum?

Welllll, maybe we should hold off for now.

Why? Is there any reason NOT to give it to him? Shouldn't we play it safe?

(Our nurse - who's new to us and the clinic - didn't have a good answer for me on that one. I later found out she was hesitant because she didn't want to put him through the trauma of the shots - more on that later).

So, I emailed the school nurse that night with all of this new info - asking her to please try again to persuade the family to see a doctor. I then proceeded to email Camp Okizu and others about our canceled weekend.

I also told the boys the bad news, that we wouldn't be going to Camp Okizu this weekend. They were really bummed. Callum cried. It was heartbreaking. :( So, the softie that I am, I said well - we already planned on taking tomorrow (Friday) off, to drive to Camp. How about you guys stay home and relax instead?

Really? Miss school? Okay! That seemed to cheer them up quite a bit. ;-)

I got word from our school nurse, about mid-day on Friday, that Callum's classmate had an appointment with his doctor that afternoon. Yay!!

Meanwhile, I was pressing our oncology team (and directing a lot of my questions to our oncologist since I wanted to hear his thoughts on this), about going ahead with the immunoglobulin shot. It seemed to me, if they wanted me to assume Callum was exposed, and cancel our Camp Okizu trip, then we should also assume he was exposed and therefore get the shot. I did finally get that agreement from our oncologist in the afternoon - the clinic called and asked how quickly we could come in for the shots (there would be at least 2 she said and maybe 3 depending on his weight). We made an appointment for 5pm that evening.

Because we didn't know if we'd need to access his port or not (if he had a bad reaction we might meed to), I prepped him with Emla (numbing) cream on his port and both arms. He was terrified and started to panic - since the "magic cream" equaled pokes. :( I explained we weren't accessing his port, just a shot in his arm, and these others were "just in case".

But why do I have to get a shot? (Tears were streaming down his face)

Because your friend got really sick and we need to protect you.

It turned out, he needed 3 shots. And, the shots are intramuscular - so, similar to a flu shot. Which means they'll hurt like hell. :(

The lead nurse asked me how we should do it - all at once? I said yes - let's get it over with. HOWEVER, what I thought she meant was one after another in rapid succession, no waiting around. What she meant was LITERALLY all at once.

This important distinction dawned on me as they started prepping all three spots at once, but by then it was too late to back off - the train had left the station and I now needed to keep my kid as calm as possible. (He was playing on his iPad while they prepped, so he was only mildly nervous at that point)

Plus, I was pretty sure it was still the better way to go, since the shots would be painful and he would be harder and harder to hold if we did them one by one.

We had three nurses administering three shots at once. One in his arm, two in each thigh. I was near his head/shoulders, to hold down his upper body. Another nurse was at his feet, clamping down his knees and ankles. One of the nurses said "Ok, in on three right?" Yes. And 1-2-3, all three shots in at once.

You can imagine the screaming. The crying. The shaking. And then me just holding him close and doing my best to calm him down after it was all done.

The nurses also felt awful of course. So they immediately rushed out and back in again with all sorts of goodies to appease my poor kid.

One brought in ice packs to lay on each of the shot sites. Another brought in 3 Popsicles, for his 3 shots. And another brought in 3 different toys. You can see everything laid out on his bed in this pic, which was taken about 10 minutes after his shots. He immediately starting in on the Lego pack, which cheered him up immensely (thank goodness!).

We hung out for another 45 min or so, after the shots, to do another set of vitals and to make sure he didn't have any immediate reaction to the immunoglobulin (he didn't). I was also given instructions to keep monitoring him after we got home.

The immunoglobulin shots are, ideally, supposed to prevent him from getting chickenpox at all. But at the very least, they should lessen the severity of the virus, should he get it. So it's best that we got the shots.

And, while we were en route to the clinic for the shots, I *did* get an email from the classmate's mom (and school nurse, both), confirming the child does have chickenpox. So, we made the right call for sure.

Now all we do is keep an eye on things, and if we're at the clinic for any appointments, we need to keep him in isolation, since he'll be contagious for (roughly) the next 3 weeks!

Just when we're about to finish school, enjoy the summer, and wrap up his chemotherapy program, we get another little reminder of how seriously scary this all is. *sigh*


(The Jodoins were joining us for dinner Friday night - so when we got home from the clinic, Callum immediately ran into the house, looking for his buddy Connor, like what he'd just been through was no big thang. The kids swam in the pool, ate some dinner, and then played games, all night long, chatting nonstop the entire time. When I put Callum to bed that night, he said it was the best day ever, even though he had to get 3 shots. So glad we have such a happy and strong little trooper on our hands!) :)
Posted by Mama Bree at 9:34 AM

Callum and all of you are amazing!