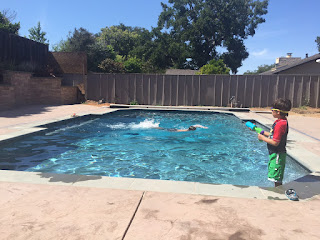 Last week we had a couple of days that hit the upper 80s and low 90s (followed by rain a few days later - go figure!). We need work done on the solar panels which heat the pool, so I kept telling the boys they can't go in the pool yet because it's not ready. But, when it was sooooo hot out, they convinced me it'd be ok. :)

They had a blast. They both swam around, diving and dunking and shooting their water guns and throwing balls and making up all sorts of games for a good two hours before I decided it was time for them to get out, clean up, and start getting ready for dinner. They were both so bummed and would have probably stayed in the pool until it was dark, had I let them! :)

I'm so glad we have this outlet for them to play. I foresee many summer afternoons just lazying around our pool and backyard. I can't wait!
Posted by Mama Bree at 10:36 PM