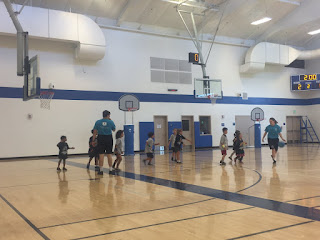 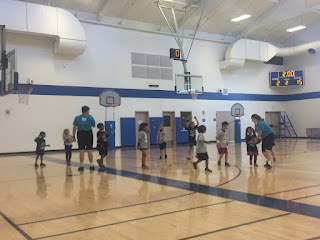 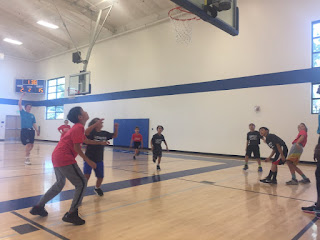 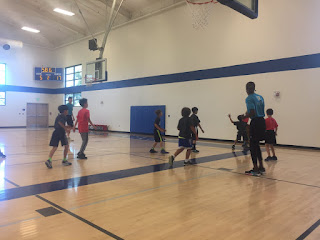 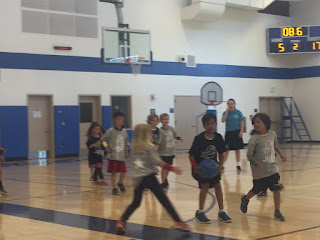 Today kicked off our plethora of summer camps!

I asked the boys if they'd rather go to swim practice in the morning, before camp, or in the evening, after camp. Surprise surprise, the lazy bums picked the evening time. ;-)

So, they slept in and lazed around this morning before the morning Ladera Camp - which is nothing more than fun and games and arts and crafts at the neighborhood Rec center.... but the boys love it and it was one of the first camps they asked me to sign them up for again this year.

Only, when we showed up, moody Logan didn't see anyone he knew (well), and didn't see any of his favorite (fun) counselors, so he was wearing a bit of a scowl on his face as I left them for a few hours.

I came back just after lunchtime to pick them up, change them into tennis shoes, and then walk over to the neighborhood school gym, which is where their basketball camp is this week!

BOTH boys were pretty grumpy about it tho - telling me they "hated" basketball and didn't want to play and just wanted to go home. Logan had also hurt his back during Camp Ladera somehow, so he was complaining about that too. I thought GOOD LORD THIS IS A ROUGH START.

So, I hung out for a little bit with them until the Head Coach started making the welcome announcements and getting the kids gathered into groups. I could tell he was a pretty funny guy and even managed to crack a smile or two out of my grumpy boys, so I was sure they'd eventually enjoy it - but they definitely didn't make Coach Will's job easy, I am sure of it!

I was a little early when I came back to pick them up, so I got to watch the teams playing a couple of games. Callum had a HUGE smile on his face and was running all over the court like he owned the place. Logan was much more serious (and in a much tougher game, given he was playing with the bigger kids), but was - surprisingly - playing (and not sitting on the sidelines nursing an injured back), and in the thick of it all!

Once "time was up", Callum asked to stay a bit longer to shoot some hoops, so Logan and I hung out on the bleachers a little bit longer while Callum goofed around with anyone willing to give him the time of day. :)

We headed home to rest and snack for a bit, and then suited up and went back to the Rec center for swim practice in the evening. Logan was again, super duper impressive just sticking with it and swimming his heart out. Callum, unfortunately, has continued to stay out of the water, as stubborn as ever, about not wanting to swim with the team. :(

So, 3 hours of Camp Ladera, 3 hours of Basketball Camp, and 1 hour of swim team practice later.... the boys (and I!) were pooped. Day 1 of our crazy hectic summer schedule is done! 😜
Posted by Mama Bree at 11:10 PM