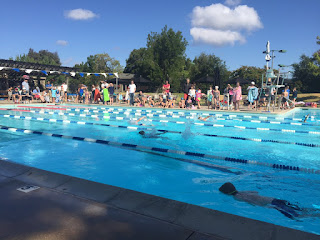 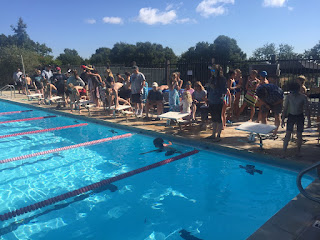 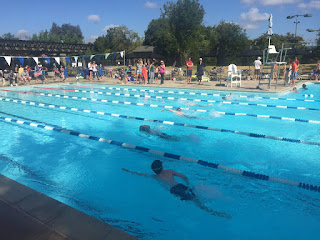 Swim season is now upon us!

This last Saturday morning, the boys and I headed to the Rec center for the swim team time trials. Callum has refused to practice with the team :( so I feel like we've made some backwards progress with him (at least last year, while he didn't compete, he still practiced with the team!).

Logan has been a real trooper though - he's in an older category this year which means all of his races will be 50 meters (vs the 25 he competed in last year). He's still not comfortable diving off the block, so you'll see he's starting in the water for his time in the second pic. He's also just barely started to learn how to flip turn - and I didn't think he'd try it but totally surprised the heck out of me when he took the flip turn on his race and headed back to complete his remaining 25!

One of the coaches came over to me, while he was racing, to tell me how impressed she was with his swimming. She said he looked like a completely different swimmer out in the pool this year - and I couldn't agree more! He looks so much stronger and faster than last year. And much more comfortable over all. He still needs to work on his pace and endurance, but I'm seeing improvements at each practice, which is so fun!! I asked her to tell him the same when he finished his race, since I thought he needed to hear the praise from someone besides dear old Mom, which she, of course, did. :)

Should be a fun season this summer!!
Posted by Mama Bree at 10:57 PM