Callum turned 6 months old last week - which sorta just came and went, without me quite realizing what a big milestone he's reached, until it was too late. Work is still pretty hectic, so that's definitely partly to blame. But having two kids is just way more work and craziness than having one (duh Bree). I'm starting to accept the fact that I may always be behind on my monthly updates for poor Callum. *sigh* 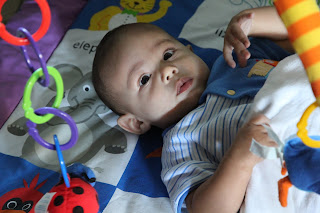 So what's new with Callum? Other than gobbling up any food we give him, I'd say his other biggest change this past month is being able to sit up on his own. And, he's getting better and better at it every day! He still can't balance for TOO long, before he topples over, left or right, or slams his head straight back. But, he's doing better each day that we practice. I'm looking forward to the day that I can set him down and know that he'll be fine just hanging out, sitting in one spot, playing with all the toys around him. 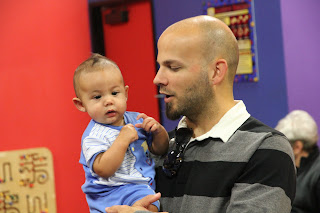 But for now, he's still pretty demanding of our time - he LOVES to be held, and isn't afraid to show it. He likes to sit on his own too, but he gets tired after awhile and that's usually when he topples over. He's a kicking fiend as well - and can't stop kicking his legs out straight and locking up his knees. Which means, he's great at standing on his tree trunks for long periods of time (with one of us to balance of course), just watching the world pass him by. 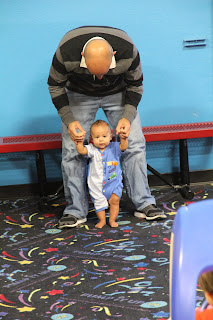 But, when he's been sitting and then just habitually kicks those legs out, WHOMP, his whole body flies backwards and he slams his head on the ground behind him.

Or, as was the case this past weekend, when I had him sitting in his car seat on top of the dining table, he kicked so hard, arching his back at the same time, that he managed to kick himself OUT of his car seat and, sad to say, had his SECOND fall to the floor. :( It was soooo awful. I saw it happening in slow motion and ran toward him to catch him but didn't make it in time (I did happen to make it in time to catch the car seat before it smacked on top of him though).

Long story short, I had situated him there temporarily, so I could more easily feed him his antibiotics without fighting/holding a wiggly baby as I tried to get him to swallow. I went to the kitchen to wash out the syringe and get a bottle, to get ready for nap time. As I'm walking back to the table to get him, that's when I see him falling.

Poor guy fell face first on the hardwood floor and, while he was totally fine (thank goodness), he was pretty upset (naturally).

So yeah, need to start buckling him into EVERYTHING. And, watch out for those damn bucking legs of his. :( 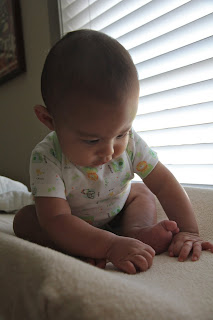 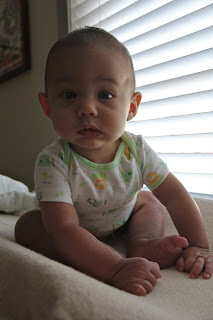 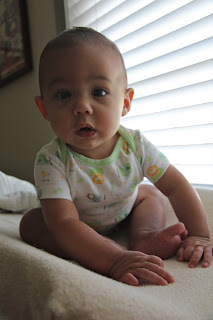 He's also getting better at reaching and grabbing anything in sight. He's gotten much better at his coordination, so he's generally pretty successful at picking up or grabbing whatever it is that he's after. And, it definitely means we have to keep a more careful eye out for anything within arm's reach around us these days!

He's becoming more chatty as the days pass by and I can't help but look forward to the days when he's Logan's age now - to see what kind of weird conversations and vivid imagination that will come out of two young boys. :)

Although no teeth have yet popped through, he's biting and chewing and teething like crazy. I'm a bit hopeful that his teeth will break through soon, since I think it might provide him a bit of relief. On the other hand, I know that will be the start of the end of my baby, as he loses his beautiful toothless smile, which breaks my heart to think that will be going away soon.

Callum remains a happy charming little baby. He smiles at pretty much anyone who approaches him to say hi. And, he doesn't just smile small. He smiles BIG. He smiles with his entire body (as he bucks and kicks and wiggles, stretching out his arms). He beams sunshine and brightens our day. What a beautiful kid in the making. 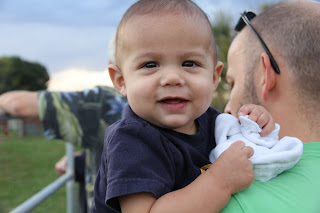 I think he has more hair than his father! He sure lights up a room with that smile. He reminds me alot of your grandfather.

Holy crap! I'm glad he's ok, but if he's strong enough to launch himself out of his car seat and send that tumbling to the ground after him be real careful of that Bumbo seat. The lawsuits surrounding that very thing.

he is just sooo cute! I cant wait to see them tomorrow!!!